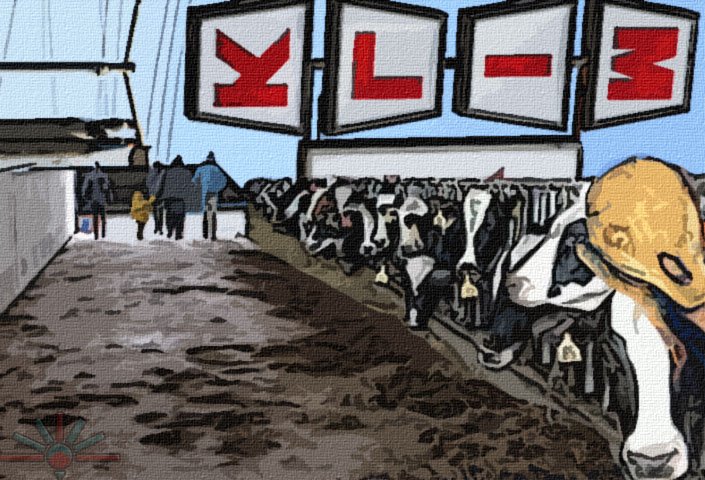 Back in February, the Center for Disease Control (CDC) published a study targeting raw milk as dangerous and unsafe for human consumption. The media jumped on it in typical fashion. You may have seen headlines like this:

While two of these headlines are technically accurate – raw milk is responsible for more illnesses than pasteurized milk when the number of people who consume each is taken into account – the concern they convey about the risk of drinking unpasteurized milk is dramatically overstated.

I’m going to examine what the research really says about raw milk safety, and compare the risks associated with drinking unpasteurized milk with other foods and activities.

As is the case with other hot button issues like vaccination and homebirth, propaganda and hype have overshadowed facts and common sense. If you only saw the headlines from the CDC and FDA reports, you’d be left with the impression that raw milk is a dangerous food and anyone that consumes it or gives it to their children is reckless and irresponsible. The purpose of this series is to present the other side of the argument, and give you the bare facts without bias or hyperbole so you can make an informed decision about whether unpasteurized milk is a good choice for you and your family.

I’m not here to convince anyone that they should drink raw milk. That’s a decision each individual has to make on their own by weighing the potential risks against the potential benefits.

Just how “dangerous” is raw milk? A little perspective…

Before we do that, however, let’s put the current discussion of unpasteurized milk safety into a wider context. Foodborne illness is a concern for many types of food. According to the most recent review of foodborne disease outbreaks in the U.S. in 2008 by the Center for Science in the Public Interest (CSPI), seafood, produce and poultry were associated with the most outbreaks. Produce is responsible for the greatest number of illnesses each year (2,062), with nearly twice as many illnesses as poultry (1,112). Dairy products are at the bottom of the list. They cause the fewest outbreaks and illnesses of all the major food categories – beef, eggs, poultry, produce and seafood.

It’s also important to note that the outbreaks and illnesses associated with dairy products are generally mild compared to other foods. According to the CSPI report above, approximately 5,000 people are killed every year by foodborne illness. From 2009 ? 2011, three high profile outbreaks involving peanuts, eggs and cantaloupe alone accounted for 2,729 illnesses and 39 deaths. Yet there have only been a handful of deaths from pasteurized dairy products in the last decade, and there hasn’t been a single death attributed to raw fluid milk since the mid-1980s, in spite of the fact that almost 10 million people are now consuming it regularly.

The takeaway is that thousands of people are killed each year by foodborne illness, but they’re dying from eating fruits, nuts, eggs, meat, poultry, fish and shellfish – not from drinking unpasteurized milk.

Why the CDC report can’t be taken at face value

The CDC report claimed that unpasteurized milk is 150 times more likely to cause foodborne illness than pasteurized milk, and such outbreaks had a hospitalization rate 13 times higher than those involving pasteurized dairy products.

According to senior author of the CDC study, Barbara Mahon:

“When you consider that no more than 1% of the milk consumed in the United States is raw, it’s pretty startling to see that more of the outbreaks were caused by raw milk than pasteurized.”

But can these claims be taken at face value? No.

There are several problems with the CDC report:

What does this more reliable, peer-reviewed dataset tell us about the safety of raw milk?

The chart below lists all outbreaks and illnesses associated with unpasteurized milk from 2000 ? 2007. Click the link to display the chart:

There were 37 outbreaks and 800 illnesses from unpasteurized milk during from 2000 ? 2007, with an average of 100 illnesses per year. The estimated U.S. population as of today is approximately 313,500,000. Using the CDC’s own 2007 FoodNet Survey data indicating that 3% of the population consumes raw milk, we can estimate that approximately 9.4 million people drink unpasteurized milk (as I said above, the number is likely higher because of the explosive growth in the popularity of raw milk over the past 5 years, but 2007 is the latest reliable estimate we have).

This means you had a roughly 1 in 94,000 chance of becoming ill from drinking unpasteurized milk during that period.

Now let’s compare this to pasteurized milk, as the CDC did in their study. The chart below lists all outbreaks and illnesses associated with pasteurized milk from 2000 ? 2007. Click the link to display the chart:

This means you had a roughly 1 in 888,000 chance of becoming ill from drinking pasteurized milk.

According to these data, it’s true that you have a higher chance of getting sick from drinking raw milk than pasteurized milk. But the risk is 9.4 times higher, not 150 times higher as the CDC claimed.

Perhaps this is a good time to review the difference between absolute and relative risk. When you hear that you have a roughly 9 times greater (relative) risk of getting sick from drinking raw milk than pasteurized milk, that might sound scary. And indeed it would be, if we were talking about the absolute risk moving from 5% to 45%.

But to truly gauge the risk, we should ask how serious these illnesses are. An “illness” in these data can mean everything from an upset stomach to mild diarrhea to hospitalization for serious disease. One of the reasons most foodborne illnesses go unreported is that they are only a passing nuisance. When is the last time you had a bout of diarrhea that you suspect was caused by something you ate? Did you report it to your doctor or the county public health department? Probably not.

The statistic we should be more concerned with is hospitalizations for serious illnesses such as kidney failure and hemolytic uremic syndrome (HUS) caused by unpasteurized milk. This does happen, and children and the elderly are particularly vulnerable and more likely to experience a serious illness. That said, hospitalizations from raw milk are extremely rare. During the 2000 ? 2007 period, there were 12 hospitalizations for illnesses associated with raw fluid milk. That’s an average of 1.5 per year. With approximately 9.4 million people drinking raw milk, that means you have about a 1 in 6 million chance of being hospitalized from drinking raw milk.

The risk of dying in a plane crash (1 in 2,000,000) is orders of magnitude lower than dying in a car accident (1 in 8,000) – and yet most people who are afraid of flying don’t hesitate to get in their car. But as unlikely as dying in a plane crash is, it’s about 3 times more likely than becoming hospitalized (not dying) from drinking unpasteurized milk.

As I said earlier in the article, there has not been a single death attributed to drinking unpasteurized milk since the mid-1980s. There were 5 stillbirths attributed to an outbreak linked to bathtub-style Queso Fresco in 2000 in North Carolina. These were the only deaths during the 2000 ? 2007 period I analyzed.

How does the risk of drinking raw milk compare to other foods?

Now let’s put some of these abstract numbers into perspective.

According to the CDC Morbidity and Mortality Weekly (MMWR), from 2006 ? 2008 there were an average of 13 outbreaks and 291 illnesses per year associated with shellfish and mollusks. According to the CDC FoodNet Survey, about 5.7% of the population (17,869,500) consumes shellfish. This means you had a roughly 1 in 61,000 chance of becoming ill from eating shellfish. That’s about 1.5 times the risk of becoming ill from drinking raw milk (1 in 94,000).

hWhat about other, more commonly eaten, foods? Check out the chart below, from the 2008 CSPI report. It shows the relative incidence of foodborne illness from 1999 – 2006, adjusted for consumption. 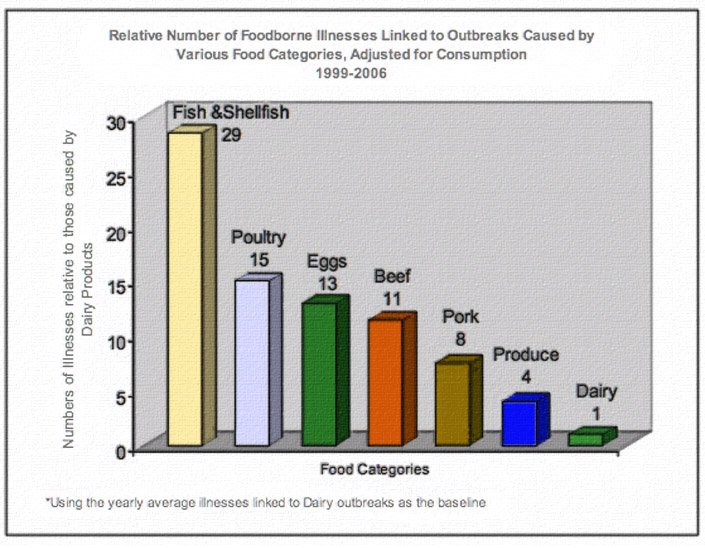 As you can see:

I hope this helps you understand the true risk of drinking unpasteurized milk within the context of other risks most of us take on a daily basis without a second thought. Of course, the next question that naturally arises is why someone might be willing to take any additional risk with raw milk – however miniscule it is on an absolute basis – when pasteurized milk is readily available.

In Raw Milk Reality: Benefits of Raw Milk, I’ll address that question by exploring the benefits of raw milk from a variety of perspectives.