A Real Life Tale of Battle With Unseen Forces

They are all around, in the air I breathe, colonizing my mucous membranes and forming mycelia through my brain and nervous system. My skin crawls with their prick, first on my temple, then my cheek, now my forehead. A tick has developed beneath my right eye, my heart races one moment and slows the next. Loki sits across the room sneezing in furious bouts every few minutes. His eyes are red and running, his breathing harsh and labored. We are both lethargic and uninspired, our brains foggy, unable to focus or to make decisions. As we twitch and gasp, the night deepens and the air seems to close in–oppressive; full of unseen spores and myco-toxins.

Loki and I had recently moved into an old neglected apartment, with a strange smell, gently reminding us of cat piss. We soon discovered that underneath the carpet the floor was completely digested by mold. There was no ventilation other than a few small windows, which were constantly dripping with condensation. Even the ancient fridge was harboring a variety of fungi. The air was close and the smell of musty cat urine oozed out through the air.

During the winter we noticed we were constantly lacking in energy. Loki’s asthma, which he hadn’t had since he was young, returned and steadily grew worse. When the temperature suddenly warmed up with the coming of spring, our symptoms became more acute. Finally, I went through three days of intense sinus headaches, fevers, nausea and vomiting. During this time all I could do was toss and turn, even groaning, as I tried to find a position that eased the pain. Half asleep and half awake I had strange lucid dreams of conversations with large wolves and little people alternating with sharp pains in my uterus and chest. I was getting my period every two weeks. 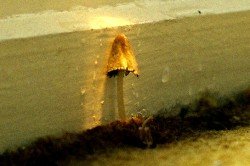 Our concern that our health was being effected by these damp moldy conditions was confirmed after finding mushrooms popping their slimy heads from an especially damp corner of the room. I remember how I found them. I was pushing aside one of the long curtains in the living room when I noticed some strange cords poking out from the edge of the carpet. I looked closer and suddenly realized I was looking at mushrooms, not cords. Stunned, I yelled for Loki, he came over and grumpily stared at what I was pointing at.
“Yeah, so?” he started to mutter, “why are you looking at those cables?”
I said “No. Look!”