A couple years ago we stumbled into a magical forest of 7 – 8 foot mulleins. Mullein flowers are traditionally infused in olive oil and used for ear aches (it works, I’ve used it). The large fluffy leaves are traditionally smoked to relax the lungs of people with asthma (this works as well), I used to make a great herbal smoke mix using mullein leaves as the base.

Mulleins are one of my favorite plants, they seem like such alien spirits, but are so gentle and fluffy at the same time. Once again Mujaji makes the perfect track to fit for these images. Mullein is an intelligent and generous plant ancestor, and is widely respected in cultures around the world. It is one of the first plants to start growing on stony fields or hillsides, it is a very tough plant and can survive quite extreme temperatures. Many people overlook mullein or think of it as an annoying weed these days, but in the old days it was highly respected.

Large, placid mulleins, as summer advances, velvety in texture, of a light greenish-drab color, growing everywhere in the fields–at first earth’s big rosettes in their broad-leav’d low cluster-plants, eight, ten, twenty leaves to a plant–plentiful on the fallow twenty-acre lot, at the end of the lane, and especially by the ridge-sides of the fences–then close to the ground, but soon springing up–leaves as broad as my hand, and the lower ones twice as long so fresh and dewy in the morning–stalks now four or five, even seven or eight feet high. The farmers, I find, think the mullein a mean, unworthy weed, but I have grown to a fondness for it.

Every object has its lesson, enclosing the suggestion of everything else and lately I sometimes think all is concentrated for me in these hardy, yellow-flower’d weeds. As I come down the lane early in the morning. I pause before their soft wool-like fleece and stem and broad leaves, glittering with countless diamonds. Annually for three summers now, they and I have silently return’d together; at such long intervals I stand or sit among them, musing and woven with the rest, of so many hours and moods of partial rehabilitation of my sane or sick spirit, here as near at peace as it can be. 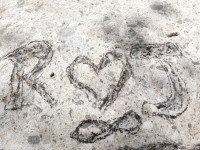 Although my partner and I are not sure what the exact date of our anniversary is, I recently decided to take a page from my own book and start to create a ritual of celebration for our partnership around a date. We marked one down on the calendar about a month ago and today is the day. August 26t ...