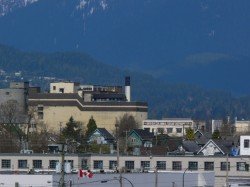 Consumption of refined sugar is the most pleasant means of gradual suicide.

On Easter Monday (April 13, 2009) we finally stepped out of the house and went on an excursion. The cherry blossoms are out in Vancouver and Spring is finally in the air. We hadn’t been out in months. We decided to head down to False Creek and check out how the building of the Olympic Village was going.

popping into my head. To be honest I am not sure if this happened before or after I took the photos of the old Canadian Sugar Refinery Building, but it probably doesn’t really matter. I found it interesting that this song kept nagging at me as it has been a very long time since I have heard music in my head like this.

Vancouver’s sugar refinery was established in 1890, by B. T. Rogers and was the beginning of Rogers Sugar. It was:

The refinery was Vancouver’s first major industry not based on logging or fishing. The Vancouver refinery is an efficient, productive facility to this day, and $1 million is invested annually in this plant. source