The Death of my Soya Sauce

The death of my soya sauce provides a wonderful opportunity to both grieve and celebrate experimenting with food.  Yes, you read that correctly, my soya sauce is dead.  There will be no beautifully aged, complex tasting, umami-full soya sauce in my pantry, or in the pantry of any of my family members and friends.  However, I learned a bit more about the varied and rich processes found in Asian cuisine, and that is the purpose of experimentation. 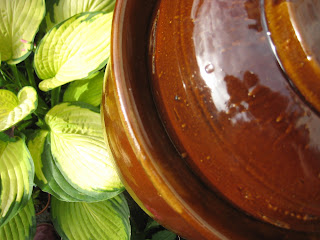 As my loyal blog readers may remember, my experience thus far with my homemade soya sauce was a bit unsettling and traumatic.  It started out innocently enough, got a little bit creepy, and then turned downright Lord of the Flies.  I was seeing it through though, putting up with its stank, settling in for the long haul.

Picture this.  I was allowing my sauce precious house time.  It sat there stankin’ up my living room, smelling like death.  Seriously, it smelled like death.  But the time came.  I decided to peer in, pulling the cheesecloth aside for the last, fatal time.  If I hadn’t looked closely, been willing to get down and dirty with my soya sauce, I never would have seen the awful truth – there were many tiny, tiny, tiny white crawlies using my fermenting soya sauce as a home. 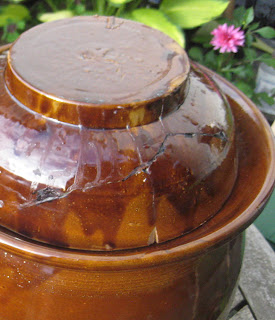 It had to go.  That was the final straw.

And my fantastically rustic ceramic pot that I bartered to get?  The pot that looked as if it were made to brew soya sauce in?

It’s now a new home for my curly fern.

As I started to write this post, I kept wanting to write: "Fermentation is not commonly used in the West." After I wrote it though I kept coming up with examples of fermented products - beer, wine, cheese, 'kraut, pickles, vinegar... etc. etc. We clearly ferment a lot of things. I suppose that in t ...