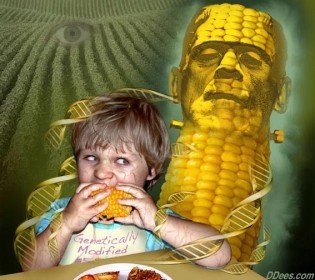 This article is written by Jeffrey Smith for The Institute of Responsible Technology. They are encouraging everyone to share and repost this information as widely as possible. More information on the history and goals of Monsanto are posted in this article: Monsanto: The World’s Poster Child for Corporate Manipulation and Deceit. Franken Corn image by Dees Illustrations

A couple quotes from the above article, also by Jeffrey Smith:

At a biotech industry conference in January 1999, a representative from Arthur Anderson, LLP explained how they had helped Monsanto design their strategic plan. First, his team asked Monsanto executives what their ideal future looked like in 15 to 20 years. The executives described a world with 100% of all commercial seeds genetically modified and patented. Anderson consultants then worked backwards from that goal, and developed the strategy and tactics to achieve it. They presented Monsanto with the steps and procedures needed to obtain a place of industry dominance in a world in which natural seeds were virtually extinct.