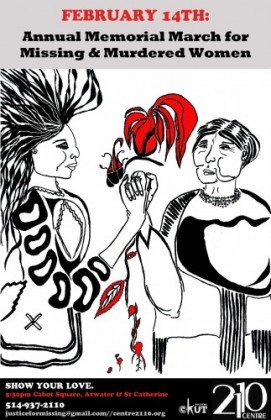 Justice for Missing and Murdered Indigenous Women invites you and yours to attend, spread the word about, and participate in this year’s Memorial March for Missing and Murdered Women on Tuesday February 14th noon at the Carnegie Community Centre Theatre, 401 Main Street (corner Hastings, Vancouver) where family members speak in remembrance. Given space constraints, we ask the broader public to join us at 1 pm, when the march takes to the streets and proceeds through the Downtown Eastside, with stops to commemorate where women were last seen or found; speeches by community activists at the police station; a healing circle at Oppenheimer Park around 3 pm; and finally a community feast at the Japanese Language Hall. Thank you to Buffalo Spirit for the big drum.

The first women’s memorial march was held in 1991 in response to the murder of a Coast Salish woman on Powell Street in Vancouver. Her name is not spoken today out of respect for the wishes of her family. Out of this sense of hopelessness and anger came an annual march on Valentine’s Day to express compassion, community, and caring for all women in Vancouver’s Downtown Eastside, Unceded Coast Salish Territories.

Twenty one years later, the women’s memorial march continues to honour the lives of missing and murdered women.

I've said over and over again that our leaders are literally insane because they are infested with parasitic microorganisms (similar to this parasitic fungi that brainwashes ants). Now we are seeing the true depths of their blind madness. They are so obsessed with controlling everything they can't s ...

Excerpts from the Question and Answer session with Alice Jongerden and Declan O'Driscoll after the screening of Milk War in Vancouver, BC. Gives the history of the pasteurisation laws in Canada, some of the differences between BC and Ontario, how Home on the Range cowshare got started and why Al ...