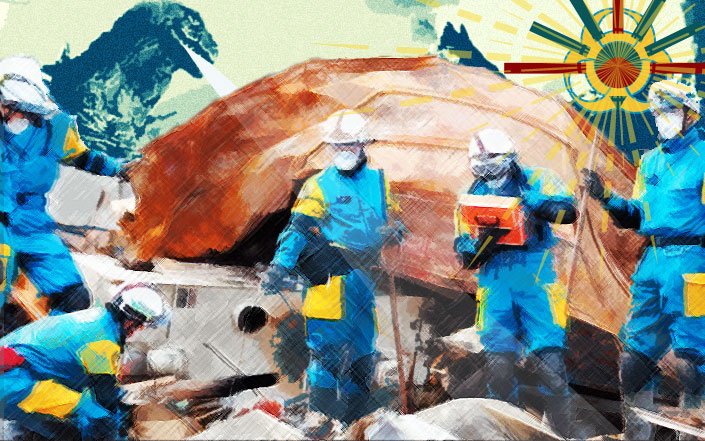 In December, Japan‘s prime minister, Yoshihiko Noda, declared that “a cold shutdown” had been achieved and that the crisis at the Fukushima Daiichi nuclear power plant was now over. “Today, we have reached a great milestone”, Noda told the Japanese people in a televised address. “The reactors are stable, which should resolve one big cause of concern for us all.”

But Mr Noda’s optimistic assessment appears to have been premature. Nuclear engineer and former power company executive Arnie Gunderson compared the prime minister’s statement to President George Bush declaring “mission accomplished” on the deck of the USS Lincoln in 2003. Gunderson calls the situation at Fukushima “a long battle, far from over.”

Even Tokyo Electric Power Company (Tepco), which owns the Fukushima facility, says that it will take another 40 years to fully decommission the reactors there, a project which poses unprecedented engineering challenges. But the company’s own tests disclose a more immediate danger. Rising radiation levels within one of the reactors, the highest recorded so far, and evidence of a leak in the critical cooling system demonstrate that the situation is still far from stable.

Tepco revealed at the end of March that protective water levels in the containment vessel of Reactor No 2, were far shallower than they had expected, which might mean that the uranium fuel rods there are no longer completely submerged, and are heating up. The Japan Times reported on 29 March that radiation inside the vessel has reached 73 sieverts per hour – high enough to administer a lethal dose to a human in a matter of minutes, even to disable the robotic devices which are sent regularly into the reactor to monitor what is happening there.

Conditions elsewhere in the plant are more difficult to assess. Reactors 1 and 3, both of which melted down after the earthquake and tsunami last year, are currently sealed and impossible to enter, even by robots. So we don’t know what is going on inside those crippled structures.

But nuclear experts say that their biggest concern involves Reactor 4, which sustained severe structural damage during the earthquake and subsequent hydrogen explosions which collapsed its roof. This is where hundreds of tons of spent fuel sits perched 100 feet above the ground in a cooling pool exposed to the open sky.

A report released in February by the Independent Investigation Commission on the nuclear accident called this pool “the weakest link” at Fukushima. Robert Alvarez, former senior policy adviser at the US department of energy said: “If an earthquake or other event were to cause this pool to drain it could result in a catastrophic radiological fire involving nearly 10 times the amount of Cs-137 released by the Chernobyl accident.”

How likely is this? While the structure of Reactor 4 is stable for the moment, the Dai-ichi plant lies miles from a big earthquake fault – as large as the one that caused last year’s quake, but much closer to Fukushima. According to a study published in February (pdf) in the European Geosciences Union’s journal Solid Earth, that fault is now overdue for a quake.

Whether or not the critical pool at Reactor 4 would survive another major quake intact, Edwin Lyman, a physicist with the Union of Concerned Scientists, told me in a phone interview that a failure of the jury-rigged inadequate piping installed after the disaster could knock the cooling system out of commission.

After visiting Fukushima on a fact finding mission recently, Senator Ron Wyden wrote to Japan’s ambassador to the US warning that, “loss of containment in any of these pools could result in an even greater release than the initial accident. “Wyden urged Japanese authorities to remove the spent fuel rods from the vulnerable pools to far safer “dry cask storage”, which would protect them from potential earthquake release. Yet, the technological challenges of such a transfer of highly dangerous materials are formidable.

These risks have led two former Japanese diplomats on a crusade to avert what they see as a disaster waiting to happen. UN veteran Akio Matsumura and former Japanese ambassador to Switzerland Mitsuhei Murata attended a conference in Seoul at the end of March “to inform the participants from 54 nations of the potential global catastrophe of reactor unit 4.” They called on the international community to set up an independent assessment team of structural engineers and nuclear scientists to study conditions at Reactor 4 and recommend a course of action.

What lessons can the nuclear industry in the US draw from the Fukushima accident and its still unresolved aftermath? Edwin Lyman describes it as a wake-up call that we have not yet heeded. He told me in a phone interview that the Nuclear Regulatory Commission (NRC) has failed to fully implement the recommendations of its own post-Fukushima task force.

Lyman says that several nuclear plants in the midwest, south and west are located near earthquake faults, including two plants in California – Diablo Canyon in San Luis Obispo county, and San Onofre between Los Angeles and San Diego.

Both of the California facilities suffered what the NRC terms “near misses” within the last year. At Diablo Canyon, the plant’s engineers inadvertently locked a series of emergency valves in the reactor cooling system, an error which was not noticed for 18 months and could have led to a meltdown in the case of an emergency. The problem at San Onofre involved a leak of radioactive steam from a worn generator tube in January. The plant has been shut down indefinitely and is currently undergoing extensive testing.

While a Fukushima-type disaster could happen here in the US, Edwin Lyman insists that it doesn’t need to. But he says that we have to act now to require new safeguards, demand higher performance standards and expand the roster of accidents that nuclear power plants will need to protect against. Let’s hope the NRC is listening.