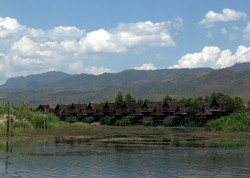 I first came across soapnuts when I was living in Myanmar/Burma in 1999. I was working at a remote hotel on the shore of the mystical Inle Lake in Shan State. My oven was made from a large barrel and was wood-fired, whenever the kitchen staff noticed me making a move to try to get the fire under the oven going myself, they would quickly send the kitchen’s expert fire-maker to take over. They had already learned the hard way that they would be completely smoked out of the kitchen if they let me attempt it myself.

The staff at the Inle Princess Resort were really a fun bunch of people, we would go to the five day farmer’s markets early in the morning and stuff ourselves with treats of fried Shan tofu and cups of sweet, strong and delicious Burmese tea, on the walk home the girls would always amaze me with their taken-for-granted knowledge of nearly every plant and it’s medicinal benefits that we passed by. They would rave to me about the wonders of the traditional Burmese shampoo. The next time we were at the market they showed me bags hanging from strings full of a yellowish liquid with these soapnuts, tamarind pods and various other herbs in them. I gave it a try and was soon a convert. Although the shampoo didn’t suds up quite as much the shampoos I was used to, my hair was soon gleaming with a healthy shine.