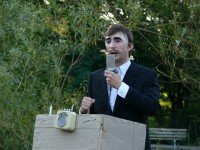 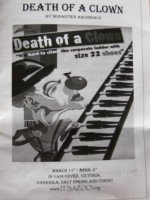 Death of a Clown

It's hard to climb the corporate ladder in size 22 shoes. Despite not being able to drink because we just started the GAPS diet two months ago, we had a very special and wonderful St. Patrick's Day this year. We spent the evening busting our sides at a play by Sebastien Archibald called The Death ...