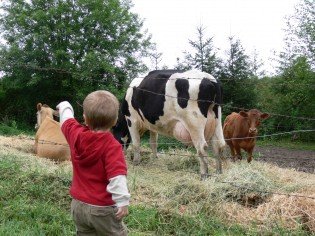 There are some things in the world that are so basic, it is hard to imagine they need to be stated, much less fought for. Air to breathe, water to drink, time to sleep and food to eat are the most basic. The unfortunate thing is, throughout history greedy, unscrupulous people have found that control of the basics is the best way to manipulate people. When I returned to North America in 2006, I had finally realized there is no where to run and hide to get away from the toxic industrial food system anymore. At that time I came across both the Michael Schmidt case, when his farm was raided by fully armed “authorities” as well as activist Derrick Jensen, through his book “A Language Older Than Words.” I had no idea at the time, that I would be moving to Vancouver, joining a cow share and that Michael Schmidt would become my Agister.