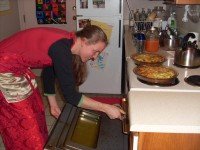 October is in general a hectic month for us at Hella Delicious, being a time of harvesting as well as getting my handmade stores ready for the Christmas shopping season. Here in Canada, Thanksgiving comes in October and so I also spent a couple days cooking for that–so I have some nice recipes for grain-free (GAPS/SCD friendly) pies that I will be posting soon. As a matter of fact, while sorting my photos from the last year to make the Hella Delicious calendar for 2011, I realized, not only have I gotten way behind in posting recipes, but I have enough recipes and photos to put together into a cookbook, so I hope to have that ready by the end of the year (which is probably a little ambitious, so we will see if it happens by then). Thankfully, we did manage to get out on October 20th for a little forest bathing in some of Vancouver’s beautiful parks–I was starting to really go nuts from lack of interaction with nature!