“An Englishman teaching an American about food is the blind leading the one-eyed.” -A. J. Liebling 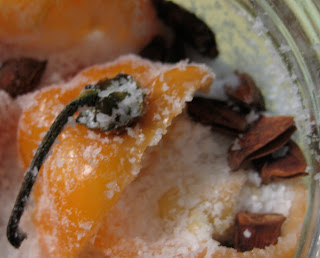 I have often heard it said that the Vancouver restaurant scene owes its bounty to our large Asian population, that the expansive palate of Asian diners mirrors that of the French.

Obviously Asia is a much larger area and contains many, many different cultures and cuisine types. What they all have in common, however, is the funk. The funk is the opposite of white bread, of pale tomatoes, of commercial mayonnaise and prime cuts of meat. The funk is spot prawn brains, spicy kimchee, furry tofu and my oh so funky homemade fish sauce. Or what will be my oh so funky homemade fish sauce.

I am a big fan of fish sauce. I guess it comes from spending plenty of time in S.E.Asia. This article reminded me of my early days in culinary school as I used to spend heaps of time in the amazing library at the Culinary Institute of America, and remember being so surprised when I found out the ...

Crispy Salmon and Avocado Spring Rolls My mother taught me how to make cha gios when I was young. She learned how to make them when she was working as a linguist in Vietnam during the war. It was our favorite food as kids and whenever we came home from boarding school for Christmas or summer ho ...