Ever wondered what they ate in Europe before the potato? Pease porridge was one of the staples of the diet. Who doesn’t love a good pea soup with ham hock or sausage? Ever thought that mushy peas might make a fantastic pizza sauce? It does. We had a little pea soup left over from dinner last night so I thought I’d give it a shot. My pea soup was made with beef broth and lots of ginger, onions and garlic, and made a lovely bright green flavorful sauce.

This recipe also makes a great gluten and grain free thin crust pizza using almond flour, the recipe for the crust is from a fantastic cookbook I have just gotten: Recipes for the Specific Carbohydrate Diet 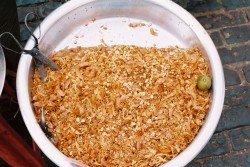