Make Your Own Seed Bombs!

It’s that time of year to seed bomb 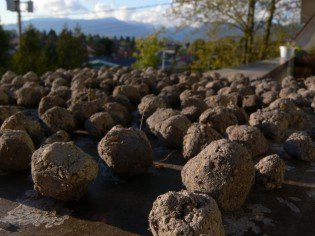 the city! I found this basic recipe for seed balls on Heavy Petal, last year and it works great:

We used a 16oz. plastic cup as a measure, which made enough for approximately 300 seedballs. After mixing together all the dry ingredients, we added enough water to form a mix that held together without crumbling but wasn’t so wet that it wouldn’t roll into balls. Pinching off small bits of the lovely mud, we rolled penny-sized balls and set them in trays. They will sit on my windowsill for three or four days until completely dry.

The Incredible Healing Powers of Edible Clay: The Egyptians used it to preserve their famous mummies. The ancient Greeks and Romans used it to restore health. The great German Naturopaths of the last century hailed clay as one of nature's great remedies. Mahatma Ghandi advocated the use of clay f ... 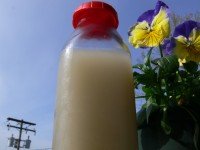 Bentonite clay has been a real life-saver for me. I am blown away by the powerful detoxing abilities of this clay. I don't remember where, why or when it was that I first started using bentonite, but I do remember the first place I ever heard of anyone eating any kind of earth was when I read One Hu ...