Today natural resources – land, forests, air, mineral and water – are under major attack from neo-liberalism, wherein a few are usurping the rights and access of a significant proportion of the disempowered. Unsustainable economic development and inequitable growth based on an economy dependent on the use of fossil-fuels and extractive industries — which intensified in the last 60 years — have led to a sharp rise in carbon emissions, way beyond what the Earth can absorb. Climate change has become a serious threat to the poor. In India, widespread and significant impacts of climate change have been noticed in many regions. These impacts adversely affect the urban working poor, the lives and livelihoods of the Himalayan and other hill people, fishing communities and other coastal and island communities, small and marginal farmers and agricultural workers, dalits, women, adivasis, forest dwellers, and other disadvantaged and marginalized communities in different regions. Large-scale displacement is taking place in these regions as agriculture is no longer fully viable but no alternative livelihood opportunities are given to people. Elites are also influencing environmental policies further alienating people from their resource base. Their struggle is not only against poverty; it is also a struggle for dignity, identity and culture. It is also the basis for women’s struggle – the struggle for livelihood rights. 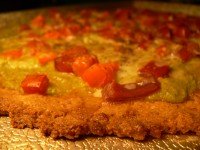 Ever wondered what they ate in Europe before the potato? Pease porridge was one of the staples of the diet. Who doesn't love a good pea soup with ham hock or sausage? Ever thought that mushy peas might make a fantastic pizza sauce? It does. We had a little pea soup left over from dinner last night s ...