Tales from the Oasis 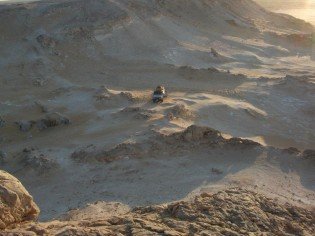 We recently went on a trip to the desert which began at an oasis. It was a lovely camping trip that was about 3 days and 2 nights. The trip took place in a land cruiser that was fully equipped for rough terrain, including a snorkel, which we didn’t end up needing in the desert. There was a driver and an English speaking guide, both of whom were Bedouin. The Oases in this part of the desert had for a long time been cut off from the rest of Egypt except for the very hardy. They were extremely traditional, as there was very little influence on them from outside until about ten years ago when the Egyptian government decided to build the Western Desert road, which runs the length of the country, and goes through a few of these Oases. All of a sudden a trip which used to take a week and would most likely have to be done by camels was cut down to four hours by car. It changed quite a bit in the lives of the Bedouin, and from my perspective, some of it was for the better (like the practice of marrying 12 year old girls). Apparently with the new road came new Sheikhs for the mosques, who informed them that they really couldn’t be marrying girls who were only 12, it just wasn’t right. It has since also made desert safaris from the Oases a practice which tourists flock to, because of its accessibility.

Unrecognized: A Chronicle of Bedouin life in the Naqab

Produced and Directed by Nirah Elyza Shirazipour, the film discusses how the state of Israel is striving to sedentarize this historically nomadic indigenous population by uprooting them from their culture and community through the denial of basic resources, house demolitions, land appropriation and ...