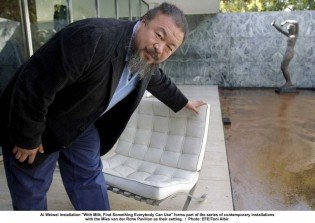 On our trip to Portland we stopped in a couple book stores and I picked up the book Ai Wei Wei With Milk in one of them. Ai Wei Wei has recently been disappeared in China and there have been demonstrations around the world to find out where he is. After the 2008 Sichuan earthquake. Ai Weiwei decided to investigate on his own account, given the silence on the part of his country’s authorities as regards the number of victims, and opened a blog to recall the dead. He also worked with the Swiss partnership of Herzog & De Meuron in the design of the Bird’s Nest stadium for the Beijing Olympics.