Pests in the Balcony Garden 09

We had a serious attack of spider mites. They started in the catnip and yarrow and somehow got to the choko and beans. They took the choko down in no time, fortunately it is a hardy plant and it has now grown back to where it was when the spider mites devoured it.

This was my first real run-in with spider mites, which are quite a common especially in container and greenhouse gardeing. I tried neem oil and washing the leaves off, but I think my problem was too advanced by the time I used these measures. I finally found a recipe for a light glue that is sprayed on the back of the leaves and smothers the mites. This has to be done every so often as the eggs will keep hatching. It seems to have finally put a stop to them and my beans are looking a bit better. I also gave them a dandelion tea because I thought it might help add some potassium to the soil and that is another thing beans can easily become deficient in if they are in containers. 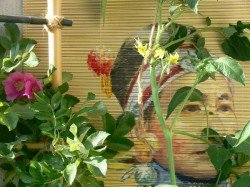 We haven't gotten that much rain this year and the hot dry weather brought out the spider mites. This is the balcony garden before they ravaged my beans. But you can see how well the potatoes, tomatoes, rose, purslane, chilis and even the rainbow chard are doing. ... 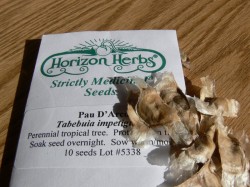 Next It was a long cold winter this year and many plants were killed by the ton of snow Vancouver got. Luckily we have a spare room that does quite well as a greenhouse in the spring. I ordered some of my favorite plants from my favorite seed companies, in fact I even became a member of the Hudson ...