Most of my life I have been excessively healthy. No cavities, never sick, and with rapid healing powers so that I have no scars despite the multitude of oven burns and other disasters that being a chef generally involve (I have chopped off the tip of my left pointer finger several times–but you wouldn’t know by looking at it!). I took that amazing health for granted, assumed that it was just who I was and didn’t stop to think for a second that it might not last. Working in the fast-paced and highly demanding culinary industry stresses your body physically, the long hours and high pressure alone are quite enough to wear you down over time, but along with that for years I maintained a diet of coffee, sugar and cigarettes. In fact I generally thought it crazy to spend money on food (working in a kitchen you get some good free meals so I didn’t really have to buy food). After a couple years of this I discovered that I was highly neurotic, with blood sugar swings that left me an emotional basket case. 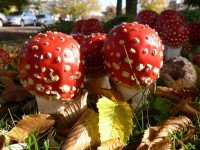 Blame it on Genetics

After reading Anna's positive experiences with the GAPs diet I ordered the book and have just finished reading it, I have tried a lot of diets over the years especially after living in a moldy apartment in Wellington, NZ which has resulted in problems with my digestive tract ever since. November las ...

« Prev12
We use cookies to ensure that we give you the best experience on our website.
If you continue to use this site we will assume that you are happy with it.