PRESS RELEASE FROM awasMIFEE (April 25, 2012): Announcing the publication of a new report into a major land grab in West Papua.

“An Agribusiness Attack in West Papua: Unravelling the Merauke Integrated Food and Energy Estate” is now online at: http://awasmifee.potager.org

The Merauke Integrated Food and Energy Estate (MIFEE) is a vast mega-project, a plan for over a million hectares of plantations and industrialised agriculture that threatens the people and environment across the southern part of West Papua. Indonesian and foreign companies have each claimed their share of the land, and offer the local Malind people next-to-nothing in exchange for the forest that has sustained them for countless generations.

West Papua, where the MIFEE project is set to take place, is a conflict zone. The Papuan people have been struggling for decades for their freedom and self-determination. West Papua is also the next frontier for Indonesia’s plantations industry – after Sumatra and Borneo’s forests have been decimated for the pulp and oil-palm industries, now Papua becomes the target. Although some plantations already exist, MIFEE represents another order of magnitude, opening the floodgates to development projects across Papua in which the losers will be the Papuan people.

awasMIFEE! has been created as an act of solidarity with the social and ecological struggles of the people of Merauke and elsewhere in West Papua. We believe that it is important that people outside of West Papua also know what is happening in Merauke. However, information available about MIFEE can be confusing – much of it comes from different companies and government bodies, and each have their own way of describing the project that fits with their own interests and objectives.

By compiling information from different sources, such as reports from the villages affected, from NGOs and other groups, from Papuan, Indonesian and financial media, from local and national government, and from company websites, we have tried to unravel what MIFEE is likely to mean for the people of Merauke. We hope that a more coherent understanding of how this land grab is taking shape will be of interest to people who are interested in West Papua, in the defence of forests and forest peoples, in the struggles against agro-fuels and against the growth of industrialised agriculture.

Most of all we hope that this information can be the catalyst for action! Our initiative is independent, unconnected to the programs of any NGO, and we hope it can also be a source of inspiration.

The report “An Agribusiness Attack in West Papua : Unravelling the
Merauke Integrated Food and Energy Estate” is an attempt to give an
overview of the situation in April 2012. It focusses on the following areas:

Source: The Australian - Honey, I killed the superbug Australian researchers have been astonished to discover a cure-all right under their noses -- a honey sold in health food shops as a natural medicine. Far from being an obscure health food with dubious healing qualities, new research ha ...

Welcome back to World Food Thursdays, please scroll down to the bottom of the page and link up your delicious international food! We want to see food from every corner of the world together, side by side being delicious all in one common community. We want to revel in our diversity, to respect e ... 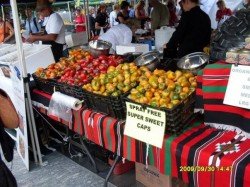 Sandra from downunder sends in some great photos of the Brisbane farmers market: Every Wednesday from 10 am to 6 pm there is a farmers market in the heart of downtown Brisbane. Local and neighboring farmers (some from up in Cairns) come down to sell their wares. My shopping for the week all came ...