Mehadrin and all Israeli agricultural exporters profit from the sale of the fruits of Israeli apartheid and are often themselves directly involved in the colonisation of Palestinian land and resources and the exploitation of Palestinian labour.[5] Exposing the complicity of these companies, building boycotts of their produce and pressuring wholesalers and retailers not to trade with them is an effective and vital form of solidarity with the Palestinian struggle for freedom, justice and equality.

The European-wide campaign against Agrexco, previously Israel’s main agricultural exporter, was a huge success and a major factor behind the company’s financial crisis.[4] Campaigns combining popular BDS action, media efforts and lobbying have led to a number of European supermarkets developing policies that claim to prevent the sale of settlement produce. Now is the time to move the campaign to the next stage: taking action against all Israeli agricultural export companies to ensure they can no longer sell their apartheid produce in Europe.

This November, the Palestinian BDS National Committee (BNC), the broadest Palestinian civil society coalition, is joining its partners in Europe in calling on solidarity organisations, trade unions, NGOs, and people of conscience across Europe to participate in Take Apartheid off the Menu!, A European Day of Action Against Israeli Agricultural Exporters.

Creative and popular actions will build the consumer boycott of Israeli goods and help launch and build strategic, well planned and long term campaigns against Mehadrin and other Israeli agricultural export companies that are at the core of Israeli occupation, colonialism and apartheid.

Let’s Take Apartheid off the Menu!

– Find out more about which Israeli agricultural export companies your local supermarkets are dealing with, and use the action day to build a long term campaign to end the relationship

– Contact info@bdsmovement.net to let us know about your plans, to find out more about an action that is planned in your area or for assistance in planning your own

This is a practical post outlining several things you can do to stop supporting Monsanto and their cronies who have foisted genetically modified organisms on us. I though it was a helpful post--it gives a good list of numbers to call. Thanks to Myra Said It--please read the full article there. Th ... 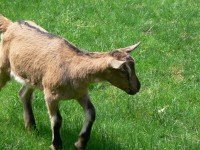 Stop FDA Tyranny Against Dairy Farms. Lately the FDA has really stepped up its mission to close down small dairies. This is the final big push of the big industry--they are preparing for the S-510 bill to give them even more power. Our dairy here in BC is currently under fire from Fraser Health. ...