Alternatively it can have a base of hard boiled eggs, sieved and added to sour cream or yogurt in various ratios to the herbs that are mixed in. This is nice because it doesn’t require a food processor or blender – just a lot of chopping or mashing in your mortar and pestle.

In India they also make a green sauce/chutney called Hari chutney which is made with cilantro, mint, ginger, coconut and chilis. Trinidad and Tobago also have their version called Green Seasoning which usually includes thyme.

Mexican salsa verde is based on tomatillos and is quite different from this recipe. 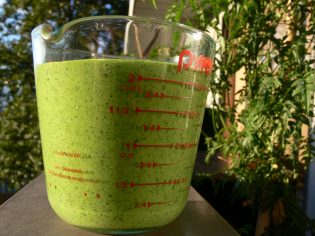 Traditionally the ingredients were pounded into a paste using a mortar and pestle. The egg yolk, mustard and oil are made into a mayonnaise and then the remaining ingredients are added in. Perhaps we loose more than we realize these days using our food processors because we don’t get any bonus minerals from the grinding of some of the stone from the mortar.

I generally use a blender, but a food processor is probably just as good. I add some oil, the egg yolk and mustard and then start adding in herbs. Usually I have to do it in batches and mix it all together in a bowl. When I am done blending everything up and mixing it together I check the taste and adjust the seasonings. I like to make large batches of this sauce and freeze it. It freezes well and retains all its nutrients and enzymes.

The great thing about this sauce is that it can be made a million different ways. The above is one of my favorites because I just love arugala, anchovies and cilantro. But feel free to use whatever you have on hand.

This condiment is wonderful for helping with digesting your foods, providing enzymes and other digestive juice stimulants. The cilantro is a powerful heavy metal chelator, the anchovies have lots of good fats and protein, the various types of cold pressed oils you can use are helpful for your cell membranes, nervous system and brain, garlic is good for digestion and getting rid of candida. Blending the ingredients up like this breaks down the fiber and pre-processes it which makes it a lot easier on your digestive system too.

As you can see I don’t include raw spinach, kale or other cruciferous greens as they aren’t really good to consume in large amounts raw especially if you have hormone imbalances. None of the recipes I have seen use any cruciferous greens, but some old recipes did use to include steamed spinach. So that is an option if you cook the spinach first or use cooked or pickled cruciferous greens, although that will also water down the flavor so pretty much counterproductive in many ways. Personally I don’t recommend it.

Other options for ingredients:

Sour: I like to use sumac to add the sour flavor into my green sauce, but generally things like lemon juice, lime juice, apple cider vinegar, capers, olives, pickles or pickle juice (lacto-fermented), sauerkraut, tamarind, kombucha vinegar etc are used.

Dairy: hard boiled eggs, sour cream, yogurt, buttermilk, butter, quark, parmesan cheese, cheese curds, home-made mayonnaise etc (these are more typically found in the French and German green sauces than in the Italian, Spanish or Indian and are used as the base before the herbs are chopped and added to them – more similar to a mayonnaise)

Unfortunately I couldn’t find much information on the origins and history of this sauce that is so well loved by so many peoples of the world. The following I gleaned from Wikipedia:

The basic recipe is probably from the Near East and, as such, is probably at least 2,000 years old. Roman legionaries brought it to Italy, from where it was exported to France and Germany. Traditionally, ingredients were coarsely chopped by hand but now it is frequently blended into a coarse sauce. Salsa verde is used as a condiment or dipping sauce for meats, fish, poultry, or vegetables. Salsa verde is traditionally served as an accompaniment to bollito misto or grilled or stewed fish.

The sauce is served cold with peeled boiled potatoes or just with rye bread, as an accompaniment to either hard-boiled eggs or roast beef brisket. It may also be served with cooked fish or roast beef, or as a side dish to barbecue. A local schnitzel specialty, called Frankfurter Schnitzel, is always served with green sauce, along with apple cider (Apfelwein) as a traditional accompanying drink.

The local importance of the dish is shown by the abundance of green sauce at local markets and by the Green Sauce Monument installed in Frankfurt-Oberrad in 2007. The latter consists of seven small greenhouses with the main herbal ingredients and was part of the Luminale, a local art and light event.

In many Hessian families, Green Sauce is part of the traditional meal eaten on Maundy Thursday, relating to its German name Gründonnerstag (literally Green Thursday).

Click here to cancel reply.
« Parmesan and Sunflower Crackers
Carrot Kanji – Traditional Punjabi Fermented Drink »
We use cookies to ensure that we give you the best experience on our website.
If you continue to use this site we will assume that you are happy with it.