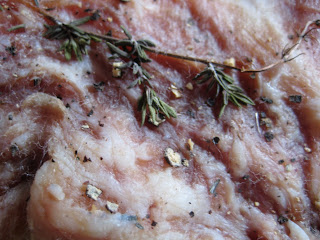 The Roman bacon was ready. It had been ready for a couple of weeks but it was trapped in my storage closet. (See Part 1: Roman Bacon for recipe and details on making this tasty treat)

First, I searched. Nothing. Second, I fretted. That also did nothing. Third, I posted an ad on craigslist looking for a lock pick.  Again, nothing. Fourth, I attempted to pick the lock myself from the oh so useful collection of youtube videos on lock picking. Can you guess? Nothing. But, as I am attempting to pick the lock, I notice a gap at the top of the closet! Is it possible?  Will the cheek fit through? Eureka! My pig cheek is rescued!

And then my love affair began. 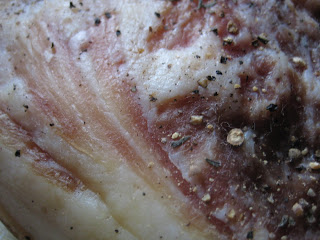 I danced around my kitchen after unwrapping my guanciale, oohing and ahhing. “My God, you are beautiful!” I exclaimed. “Oh my Lord, I think you are luscious!” I ran my fingers over the pork fat and it melted at my touch. I felt like the poet Petrarch who wrote 366 love sonnets to a woman he had only just glimpsed.

How will I feel once I taste it?

I have big plans for this guanciale. A small piece is being used in the morning to make breakfast for my brother – it’s his birthday. It will also become pasta carbonara. Having recently bought locally grown and milled flour I am also making the pasta. This will be a meal to remember and a post to look out for. Perhaps my father deserves a piece for father’s day or at least a meal made with it? Subscribe to my blog to learn the fate of my little pig cheek. 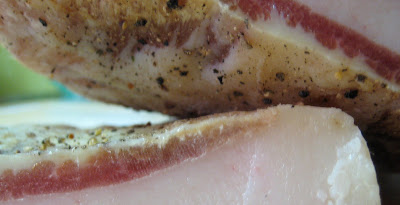 “Those who danced were thought to be quite insane by those would could not hear the music.”

Click here to cancel reply.
« Grain-Free Cherry-Almond Crunch
Volunteering at the Market and Spinach Salad »
We use cookies to ensure that we give you the best experience on our website.
If you continue to use this site we will assume that you are happy with it.