It was my brother’s birthday on June 2nd or 3rd (I always forget), which coincided perfectly with the curing of my pig cheek.  To celebrate his 26th birthday I decided to make an EPIC pork-filled breakfast and it was EPIC indeed.

First, about my brother.  We are five years apart (I’m older) but are really close friends – I think he’s a pretty cool guy.  A former academic, he has given his life over to spoken word poetry and is rather good.  Our hang-outs often involve the spontaneous spouting of poetry so I get to be an early ear for his stuff, what fun!  You can check out one of his newest creations here.  He is the water bowler.

Whenever I plan a menu I always have a few focal ingredients that I like to use to tie the meal together.  For Johnny’s! EPIC breakfast my focal ingredients are guanciale and thyme.  If you remember from Roman Bacon: Part 1, thyme was used to cure the pork cheek, so it was a natural choice.  Tying the meal together does not mean that thyme needs to be used in every dish though, I just used it with the sweet potato so it didn’t overpower the real star.

1) Start by scrubbing the sweet potatoes and then putting them straight on the oven rack and turn the oven on to 400 degrees F.  If you don’t have anything protecting the bottom of your oven then you might want to put the potatoes on a tray because the sugar drips out as they bake and forms beautiful (but very hard to get off) black bubbles.  I eat a baked sweet potato every day so I just cover the bottom of my oven with tin foil and throw that out every few months.

Start to check your sweet potato at about 20 minutes by reaching into the oven and giving it a little squeeze.  Meltingly soft?  It’s ready and should be taken out and allowed to cool. 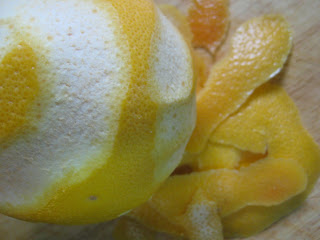 2) As that is baking, put the cranberries in a heavy saucepan on medium and get to work peeling the grapefruit.  The marney is a combination of marmalade and chutney.  It’s not sweet, it’s not savoury, it’s perfect.

Having said that, you can leave a bit of the pith (the white stuff) on your peel so just use a veggie peeler to get most of the peel off the grapefruit.  Slice into thin strips and add it to the cranberries. 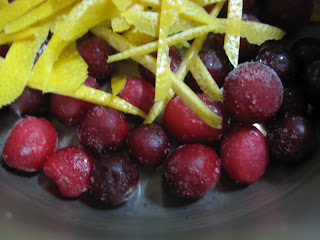 I cut the grapefruit open at this point and cut out most of the fruit (into chunks), throwing it in with the cranberries and peel.  Now add a good solid pinch of salt to the marney, because this cuts the bitterness of the grapefruit and cranberry.  Also add the white sugar.  Turn it up to medium-high and give it a good stir.  This will be cooking away as you finish the rest of the breakfast.  You can let it hard boil for a while making sure to check the consistency.  Once it reaches a nice thickness turn the heat down to low and just let it sit. 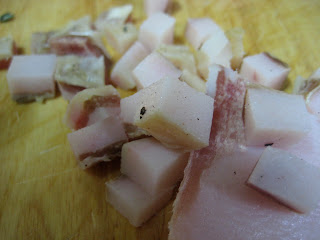 3) It’s time for the guanciale! Cut your chunk of guanciale into three pieces – one piece cubed and the other two into thin slices.  Heat a small (omelette-sized) saucepan for a few minutes, and toss in the cubed guanciale.  Let the fat render out and keep the heat to just below medium.  If it starts to smoke, take the pan off to let it cool down a little and then return it to the element.

Once the guanciale cubes have given up most of their fat and are looking crispy, take them off the heat and put them to the side and turn the heat down or off under your small saucepan. 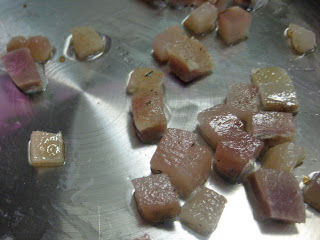 4) As the cubed guanciale is rendering, one pile of guanciale slices should also be rendering with the sprigs of thyme in a large saucepan.  The heat and oil help to release the thyme essence.  Yummy.  Again, make sure the fat doesn’t smoke!

Once the fat is rendered from the slices, take your sweet potatoes (now cool) and slice them in half.  Put the cut side down into the fat.  If you don’t hear a sizzle then your pan isn’t hot enough.  Sprinkle some salt and grind some pepper onto your potatoes and let them cook until they are golden brown.  Once they are done, take them out of the pan and pop them into the oven to keep them warm. 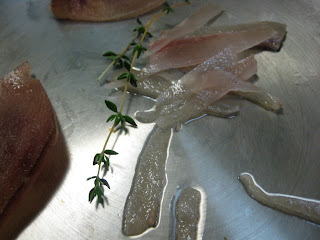 5) Using the sweet potato pan, render the last pile of guanciale slices.  As you are doing this, put the small saucepan back on the heat and start whisking the four eggs with the cubed pre-cooked guanciale.  I find that if I whisk the eggs and then immediately pour them into the saucepan my omelette is ultra-fluffy!  I like ultra-fluffy.

Put your toast on when your omelette is close to done.

Don’t overcook your omelette.  I tend to take mine off the heat when it is still slightly liquidy.  If it is left on too long then your eggs will get tough.  Tough eggs = a no no.

6) Now to put it all together! 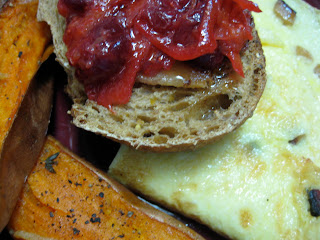 Take your sweet potatoes out of the oven and onto the plate they go.

Cut the omelette in half and put it next to the potatoes.

Put the rendered fat slices on the toast and then pour, yes pour the rest of the fat onto the toast.  Smear a large dollop of the marney on top followed by a drizzle of honey.

Click here to cancel reply.
« Volunteering at the Market and Spinach Salad
Fresh Lychee Ice Cream »
We use cookies to ensure that we give you the best experience on our website.
If you continue to use this site we will assume that you are happy with it.