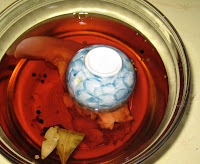 To start a tongue needs to be brined – this is a familiar first step with organ meat. I used a combination of sugar, salt and spices. At that point, I wasn’t sure what I was going to do with my tongue or I would have put a mexican spin on my spice mixture. Instead I threw in a couple bay leaves, some black peppercorns, and some coriander. To keep the tongue submerged I put a pretty blue cup on it. And there is sat stewing for a few days.

The next step is to poach the tongue until tender using lots and lots of aromatics. At this point I still wasn’t sure about where my tongue would end up so I used the spices that Jennifer recommends in Odd Bits – onion, five spice, bay leaves, and black peppercorns. I mean how this tongue had any tongue flavour left is not something I can explain. It was loaded with spices. 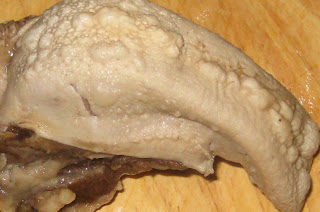 Once the tongue was nice and soft, I poked it with a skewer, I removed it from the poaching liquid and very quickly peeled the now very bumpy outer layer off. The process of peeling the tongue isn’t too hard but is easiest when the tongue is hot so get on your rubber gloves and start tugging. 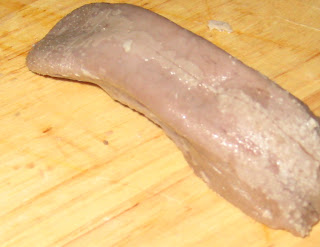 The after shot doesn’t look much more appetizing does it?

I wasn’t looking forward to eating the tongue until I remembered the secret to expanding my palate. For some reason, early in my life, I became obsessed with learning to like a wide variety of foods. The process is quite simple:

In the case of sheep’s tongue I decided to bring out the big gun – chorizo sausage. Does anything taste bad when it’s fried up with chorizo? I would venture to say no. 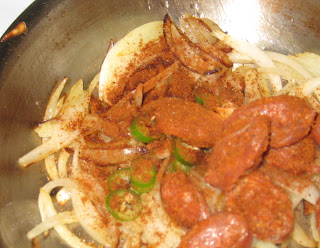 I served my chorizo and tongue fry-up on steamed rice. For toppings I used a squirt of lime juice, some chopped cilantro and slices of avocado. I love spice so I also added a drizzle of sriacha sauce.

Well much like the brain experiment, the tongue didn’t do it for me, even with the chorizo 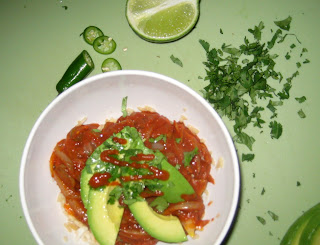 sausage. Having said that I did eat it all, which is saying something I suppose. The texture is quite smooth and the flavour wasn’t overly strong. I was amazed though that with all the aromatics and spices infused into the tongue, it still tasted like, well, tongue.