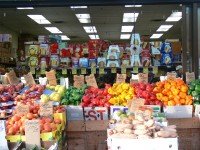 At the end of the summer I was down on Hastings in one of my favorite little stores–Como–it is run by a feisty Asian couple who speak Italian. They get in large sacks of fresh olives towards the end of the summer. This year I decided to buy one and try to figure out what to do with them. Just as I was heaving the sack onto the counter, a lovely lady behind me started asked me what I was going to do with them. I said, “Well I don’t know really.” She smiled and happily started telling me her recipe which had been handed down to her from her mother–a real traditional recipe (that’s why I love this area so much!). Her English wasn’t perfect, but I managed to get a pretty good idea of what she was saying and figured the rest out as I went along. 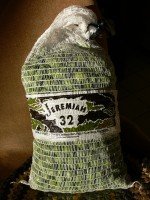 She told me to put 1T of sea salt into one litre jars, fill them up with fresh olives and garlic and then fill them with fresh water. Simple! The next part was the harder part to understand. She was telling me something about having to unscrew the tops of the jars to let out the air pressure that would build from the salt breaking down the tannins in the olives. She laughed as she told me how her kids loved to do that, and loved watching the air bubbles rise to the surface in a rush as they opened the jars.

I asked her how long they had to sit and when they would be ready to eat. She said they usually started eating them around Christmas although they would still be a little bitter and not fully cured by that time. Basically she told me to let them sit for around 3 months. I have had to wait all this time to post this recipe to be sure that they came out OK and didn’t poison me. I can now tell you with the confidence of experience that she knew what she was talking about. These home-made olives are fantastic, slightly crunchy and slightly bitter–I started eating mine a little too early too–my partner doesn’t like them when they are too bitter–all the more for me, although the next bottle we crack open may be more to his liking. I think this was a 20 pound sack and it made 5 jars of olives. Next year I’m getting two sacks, starting earlier and giving them away as Christmas gifts 🙂 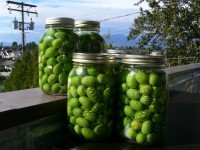 I did manage to figure out that the olives go through the fizzy process of fermenting for about two weeks. During this time it is a good idea to release the air pressure that builds up in them about once a day, or every couple days. I had thought she was telling me to just do it once after two weeks, so it was lucky I decided to check on them a few times. The air pressure had built up so much I think the jars were on the verge of bursting a couple times! Also, if some white scum develops on the top of the brine it is a good idea to skim it off. I didn’t at first and got quite a build up that had me worried, but the olives were fine. Small pockets of white might appear on some of the olives, this is just from the lacto bacilli and is nothing to fear, although if you get an olive that tastes completely yuck and quite different from the rest, trust your gut and don’t force yourself to eat it.

I checked out the recipe online as well, and found people think they have to change brine a couple times in this process. They say the brine gets weaker as the juices come out of the vegetables, but olives aren’t so juicy in the first place so it isn’t something you have to do necessarily, at least with this type of green olive. I think that sort of process is more for cukes or other juicy veggies, and for those if you start with a weaker brine it will cure them more gently so they don’t get the wrinkled appearance–although I haven’t had that problem with dill pickles either.

I have just finished off one jar and I have 4 more out on my balcony. I put them out there when the weather cooled off. They make a great snack and I really like the way the garlic has come out as well. Who doesn’t like pickled garlic? I made sure I used organic garlic in this process. I also washed the olives off before bottling them. This is a simple, traditional recipe and I just wish I had gotten that ladies email address so I could thank her again for giving it to me.

This recipe is included in my Hella Delicious 2011 Recipe Calendar. 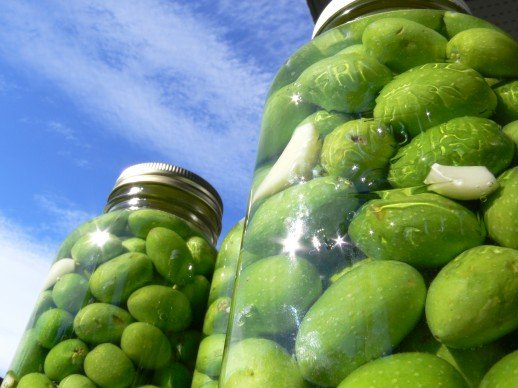