Ever wondered what they ate in Europe before the potato? Pease porridge was one of the staples of the diet. Who doesn’t love a good pea soup with ham hock or sausage? Ever thought that mushy peas might make a fantastic pizza sauce? It does. We had a little pea soup left over from dinner last night so I thought I’d give it a shot. My pea soup was made with beef broth and lots of ginger, onions and garlic, and made a lovely bright green flavorful sauce.

This recipe also makes a great gluten and grain free thin crust pizza using almond flour, the recipe for the crust is from a fantastic cookbook I have just gotten: Recipes for the Specific Carbohydrate Diet

Method:
Combine ingredients for crust (I generally grind up my dry curd in my spice blender along with the almonds) and mix well. Spread out over a well oiled tray or pizza stone and pat the crust dough out very thin onto the tray. Bake at 350F or 180C until golden brown.

Remove from oven, sprinkle the onion slices over, then the mushy peas, top with the diced heirloom tomatoes, anchovies, cheese and zatar (other herbs such as terragon, basil, mint, coriander can also be used). This pizza can also look very cool especially if the pea sauce is blended at the last minute so the peas are a bright green color. Great for a kids party. 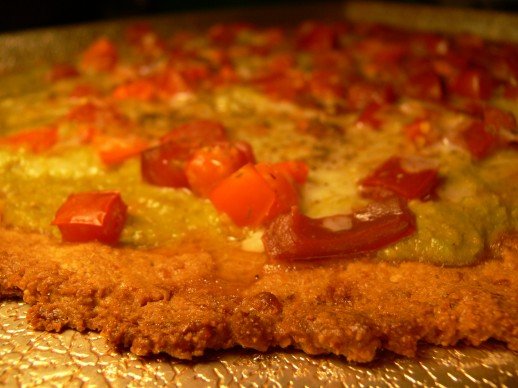 Click here to cancel reply.
« White Man’s Kimchi
Kimchi and Broccoli Salad »
We use cookies to ensure that we give you the best experience on our website.
If you continue to use this site we will assume that you are happy with it.