This soup is a staple in our diet. We have it at least once a week generally! Usually I make bone broth a couple times a week and as soon as the stock is ready I make up this carrot soup. It has gone through quite a few variations over time. The spices and types of meat that go into it can easily be varied and the soup remains just as delicious.

This recipe usually feeds 2 people for about two days. As you know, soup just gets better after sitting overnight in the fridge which lets all the flavors blend and mellow.

Method:
Saute the onions until they begin to caramelize. Add stock to deglaze the pan until the onions reach a lovely golden color. The pounded (I always use a mortar and pestle but many people like to use food processors or other gadgets) ginger and garlic can also be added in and caramelized but they should be added after the onions have cooked a bit, because they will burn more readily. Add in the meat when they have reached the point you desire. Add in the spices and saute briefly to help release their flavor and aroma.

At this point I usually switch from my cast iron skillet to a soup pot and then add in the stock and grated carrots and allow it to cook on medium for about 20 minutes to allow the flavors to blend.

Many other spices and herb combinations can be used in the soup. Cumin is also a nice addition. But this soup is also fantastic with no spices whatsoever! Another variation might use Italian herbs like oregano etc instead of the more curry type spices. 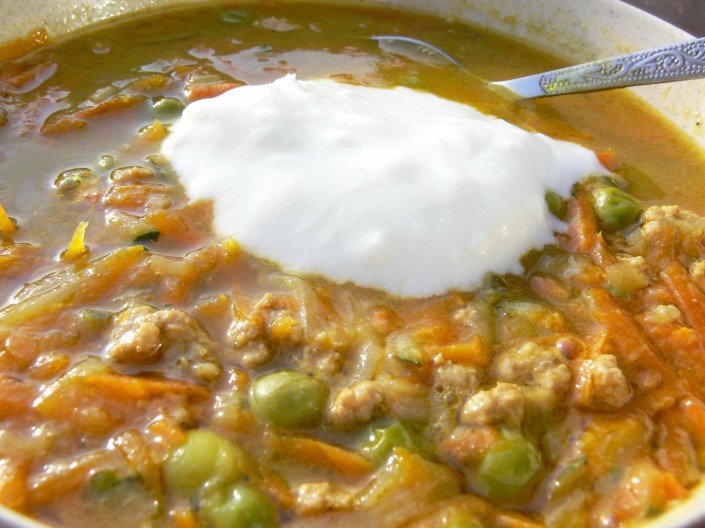 Click here to cancel reply.
« Traditional Spritz
Swedish Mustard Dip »
We use cookies to ensure that we give you the best experience on our website.
If you continue to use this site we will assume that you are happy with it.