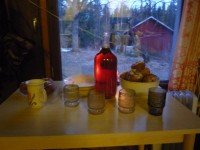 The amounts listed are for making 8 litres at a time, but can simply be halved or doubled as needed. I’ll also mention here that sima can be sweetened with varying proportions of sugar, molasses, honey, and probably other things besides. The sima I tried in Finland was actually sweetened with sugar only, which in my mind makes it not really a mead at all. Nevertheless, it seems like a common way to make it there, and it was delicious, starting my whole interest in this drink. The two options I list below are ones that I have tried myself and both turned out well, and are repeated often on the internet. In my experience the honey seems to slow down the fermenting process, and so the more honey used the more brewing time required. I actually tried a batch sweetened purely with honey, but in the times listed below it seemed to ferment very little, tasting sort of like a sweet lemonade.

Bring 2 litres of water to a boil.
Stir in either 1 kg of brown sugar, or 1/2 kg molasses and 1/2 kg honey, and remove from the heat.
Edit: After testing my latest batch I think I would change the second version above to 1/4 kg molasses, 3/4 kg honey. The molasses is just too overpowering in both color and flavor.
Combine with another 6 litres of water, for 8 total.
The temperature should now be warm, but not hot.
Squeeze in 2 or 3 lemons, or a similar amount of lemon juice.
Add 1/4 teaspoon of active dry yeast.

Cover, but don’t seal airtight, and let it sit for 1-3 days, depending on room temperature. The warmer the room the less time needed. You can now bottle and seal the liquid. Wine bottles work great. Into each bottle add a teaspoon of sugar and some raisins, and again store at room temperature.

Roughly 3 days in the bottles and the sima should be ready to drink, again depending on temperature. Aside from adding flavour the raisins are also supposed to act as a sort of gauge, rising to the top when the bottles are almost ready. But in my case the raisins seemed to just do their own thing, rising and falling again at different times.

I just open one bottle to test at what seems like a good time, and from there gauge how much time the rest need. More time means stronger flavour and less sweetness. Once you think the bottles have had the right amount of time you can refrigerate them and they should last quite awhile. They will continue to ferment, but at a much slower rate. Just don’t forget about the bottles at room temperature, or leave them super long in the fridge, as the pressure will continue to rise and they could burst.

The sima will have around 1-2% alcohol, give or take depending how long it was brewed. Sima can be flavoured with different spices or fruits, but the traditional drink seems to be the one I list here, and I haven’t tried any other flavour combinations to recommend. Some of the spices I can remember seeing mentioned are ginger, cinnamon, and cloves.

Sima is usually served chilled, and is wonderfully refreshing on a hot day. On Vappu it is traditionally served with munkki, a sort of Finnish doughnut. I have a recipe for those as well if anyone is interested. Also, I’ll just say that as I’m not actually Finnish myself, the information here is mostly based on what I picked up during a short stay there a year ago. So hopefully I don’t offend anyone if I got something wrong as to history or traditions.