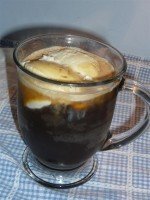 My home brewed root beer turned out delicious. I highly recommend it if you can come by the ingredients. It does have a taste reminiscent of root beer soda, but you wouldn’t confuse the two. Earthier, stronger tasting but less sweet, and the fermentation adds its own flavor in there.

All the ingredients I found at various health food stores, except the birch bark, which I just gathered myself. A fine substitute for birch bark would be wintergreen leaves, which give the same flavor.

So in a pot on the stove go:

Bring this up just to a boil, then turn off the heat and let it sit covered for 2 hours.
Then strain out all the solids, and stir in:

Method:
Let it sit 15 minutes or so, giving the yeast time to start its work and mix in evenly, then you can bottle it. I didn’t do anything fancy for the bottling, and just used some canning jars. Just make sure to leave a couple inches of space at the top of the bottles to keep the pressure from getting too high. Seal the bottles and let them sit at room temperature for about 12 hours. Then refrigerate them for 2-5 days. The more time it has the more fizzy, less sweet, and more fermenty tasting it will be. With longer times it even becomes slightly alcoholic. I tried one after 2 days and it was good, but still pretty flat. 4 or 5 days was perfect in my case.

Good on its own, and even better with a couple scoops of vanilla ice cream.

Just a note about the sassafras bark. There are warnings not to use sassafras because it is carcinogenic, and it’s no longer used in commercial root beer for that reason. But from a few sources I’ve heard it’s really only the extracted oils that are a problem, unless you were using a large quantity of the bark. It could probably be left out and substituted with a bit more of the other ingredients, but I didn’t think the 1/4 ounce of it was anything to worry about. I left it in.

This recipe is part of the Pennywise Platter hosted over at www.thenourishinggourmet.com.