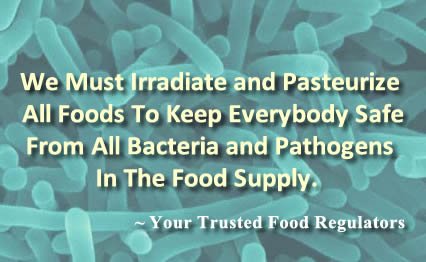 My mother has been on a diet of microwaved food for the past 15 years or so. It isn’t that the food is bad food to begin with. She has lovely meals made up for her with food bought from her local farmers markets. But when she comes home at night she use to heat it up in the microwave for dinner–how convienient, right? She also heated her water for tea and coffee etc in the microwave. After about 15 years of this she came down with pancreatic cancer. Granted there are other factors at play as well, but I don’t think this is a coincidence. The pancreas, after all is all about enzymes.

Our modern “food safety” officials are increasingly obsessed and paranoid about keeping our food “microbe free.” More and more imported and domestic food is being irradiated to kill off dangerous bacteria, it began with spices and by 2030 the plan is to irradiate all food across the board (see article below). Unfortunately this irradiation often doesn’t affect mold and fungus–in fact many types of highly dangerous fungus actually thrive in radiation.

Our Food Industry In 8 Words: We Think We Can Do Better Than Nature

I have experienced this phenomenon first hand by observing my own cultures of kefir and kombucha. Earlier this year I woke up to the fact that our apartment is in a highly toxic environment. We are at a local high point that is also at the junction of two main roads, as a result there are many celltowers on all sides of us. We also have an electrical pylon just outside our living room window, which is on the second floor so we look directly into it. We also had at least 8 wireless smartmeters installed in our basement last December. When I finally realised all of this and the effect it was having on our health I immediately got myself a Clearfield plate which is a device that converts toxic electromagnetic fields into the beneficial Schumann (earth) resonance. 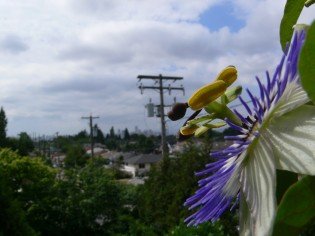 Our health immediately improved after an initial period of detox die off symptoms. I also noticed that suddenly my kefir and kombucha cultures were producing much more voraciously. These cultures are made up of symbiotic relationships of yeasts and bacteria — what seemed to be happening was the yeasts were taking over as the bacteria were being stunted and killed by the various powerful and toxic electromagnetic fields from all the wireless networks we were living in. (By the way I would love to hear if anyone else has experienced anything like this)

Fungus and other moldy health issues are becoming more and more common, some folks may chalk this up to global warming but it may have more to do with the increasing amounts of e-smog we live in. Many species of frogs are going extinct because of a fungus, bats are also being killed by fungus and many more plants and animals are affected by mildew and mold. Our current medical system doesn’t know how to handle it, their drugs are often ineffective and cause more trouble–antibiotics kill everything but generally leave pathological yeasts like candida unaffected. Irradiating all of our food is not a solution it is a short-sighted, ill-conceived health disaster.

This obsessive terror and fear of microbes is no solution. Once again diversity is our only hope, the more diverse gardens of microbes we have in our guts and on our skins, the safer we all are from some mono-culture of candida taking hold and sweeping through our systems, rotting our bodies from the inside out.

One more interesting side-note here, acoustic waves have recently been patented for enhancing the flavor of beverages such as wine etc. As this article states:

I would like to hear more information on why this is necessary and what sort of health implications it might have. Will it result in a new kind of neurotoxin? Maybe it will be entirely benign, but are we gonna once again be the guinea-pigs for this latest “innovation”?

Scientists Suggest That All Food Should Be Irradiated, Pasteurized and Sterilized by 2030

University of Notre Dame network physicists in collaboration with food scientists have recently published an analysis of the international food-trade network that claims to show a vulnerability to the fast spread of contaminants as well as the correlation between known food poisoning outbreaks and the centrality of countries on the network. The study is causing a new batch of fear mongers to reiterate what many others have already stated–specifically that all food should sterilized by 2030.

The primary claim by the food industry: As the world’s population climbs past 7 billion, the sustainable production and distribution of food is balanced against the need to ensure its chemical and microbiological safety. The new paper maps the international agro-food trade network (IFTN) — a highly complex and heterogeneous system formed around a core group of seven countries, each trading with more than 77 percent of the world’s nations. Since any two countries in the IFTN have only two degrees of separation on the network, the fear is that the IFTN is capable of spreading a foodborne contaminant efficiently. They also claim it tends to mask the contaminant’s origins once the system is compromised, since so many network paths run through the central nodes.

By 2030, food demand is expected to increase by 50 percent. Global food transport has been increasing at an exponential rate since the 1960s — faster than food production itself.

What can be done? People will no longer be able to safely rely on the food industry to feed themselves. Food scientists are voicing from their petrified little minds that as the system grows, so will the need to pressure regulation and surveillance organizations to track contaminants and prevent deadly outbreaks, such as the 2011 events in the U.S. (Listeria monocytogenes) and Germany (Escherichia coli). Both these outbreaks initiated government action to promote the agenda of seizing more control over the food supply through expanded “food safety” regulations.

There is even some evidence to suggest that the Escherichia coli superbug was bioengineered to produce human fatalities.

The study in conjunction with the Institute of Food Research in the U.K and Corvinus University in Budapest was published in the journal PLoS ONE. The paper does not predict an increase in food poisoning cases, but rather it emphasizes significant delays with serious potential consequences in the identification of the outbreaks’ sources — calling for an interdisciplinary and incentivized approach to the understanding of the IFTN that will build on its identification of the network’s critical spots.

Senior food scientist Toby MacDonald says the only way to protect the population is through current and modified sterilization techniques that will make food safe for all. “Current and modified practices including irradiation and pasteurization are extremely effective in reducing harmful bacteria and pathogens in the food supply,” he proclaimed. MacDonald says that as food demand reaches its climax, proper sterilization will be necessary at all levels. “An increase of 50 percent in food demand by 2030 will require more funding into food monitoring infrastructures so that all food with the potential to produce outbreaks can be properly sterilized to prevent those outbreaks,” he added.

The USDA has previously stated that by using radiation on all fresh produce, the number of food-borne illness outbreaks that happen each year could be substantially reduced. Despite offering no statistical study to verify this claim, USDA officials remain confident in their assertion.

One can reasonably conclude that if all food is sterilized by 2030, then we will have another epidemic on our hands. Millions will become sick and die from nutritionally deficient foods. Perhaps this has been the plan all along. So we have one option–we must reject our current patterns of food consumerism. We need sustainable communities with independent food sources free from big argiculture and the food industry. It is the only way to guarantee a food supply free of toxins, genetically modified organisms, pasteurization and irradation. It will be the only way to maintain food sources that nourish our bodies and provide health rather than disease.

Marco Torres is a research specialist, writer and consumer advocate for healthy lifestyles. He holds degrees in Public Health and Environmental Science and is a professional speaker on topics such as disease prevention, environmental toxins and health policy.

Click here to cancel reply.
« Healing Ulcerative Colitis with the GAPS Diet
Walmart and Monsanto – the power of money in food »