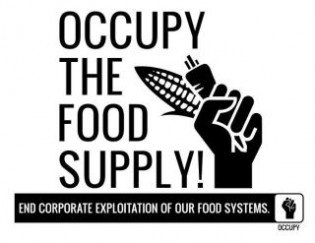 It is a delight to see more articles popping up lately discussing how us foodies need to put our differences aside and focus on ending this despicable practice of factory farming. Absolutely. I spent a little bit of time volunteering at the Food not Bombs kitchen set up for the people down at Occupy Vancouver. Although there was a large sign saying ‘vegan’ on one area of the kitchen, the people working there were happy to accept whatever donations were offered. Much of the items being donated were coming from the industrial agricultural system. Chips and crackers, bread, sometimes snacks filled with MSG, aspartame and food coloring. It would be great to be able to provide really good food from local farms, nourishing and healing. I also heard many of the people down there mentioning various digestive complaints and other issues. It is good to put a system into place to get top quality food to everyone. Personally I would like to ban refined sugar completely for a start. That stuff is so evil, just take a second to think about it’s history for a second even without knowing anything about how addictive it is and how damaging to health.

I was really glad to read the following article. Food lovers are starting to come together with a common purpose and the movement is speeding up, we are all seeing the greater enemy and that our only hope is to work together to stop the corporate agriculture industry from poisoning us all.

The thing that keeps sticking with me, though is that if we are really going to end factory farming then we have to unite — vegans, vegetarians, and omnivores alike.

Despite some pretty deep differences philosophically between the groups (the deepest actually being between vegans and vegetarians, I sometimes think), on this issue there is so much common ground that we should all put aside differences on our idealized role of animals in agriculture and relationship between human and non-human animals. We need to come together and put an end to the disgusting, cruel, environmentally destructive, and unhealthy scourge of factory farming.

I’m not the first person to suggest this; nor am I probably the most articulate writer on the subject. Tom Philpott, writing at the time for Grist (he’s now moved on the higher-profile pastures of Mother Jones), said:

If McWilliams is correct, then vegans and omnivores agree on 99 percent of the meat issue. So let’s put aside the other 1 percent — for now — roll our sleeves up, and clasp hands. There’s no fee to join the Vegan/Omnivore Alliance against Animal Factories, no number to call, no petition to sign, no special handshake. Declare you’re a member, and you are one. (I am a writer, not an organizer; the VOAAF will never formally incorporate — under my watch anyway).

Joining together on this seems an obvious collaboration to me. I’m in. And you should be in too.

It’s true, that while I don’t understand how anyone who just sees the normal conditions of factory farming can still think this is an ethically acceptable thing to do, it’s equally true that if we, vegans, vegetarians, and omnivores, can’t communicate the common ground position forcefully, ending factory farming will simply not happen. Instead we will fall victim to squabbles of dietary fundamentalism, with humans, animals and the environment as a whole continuing to suffer. Read More