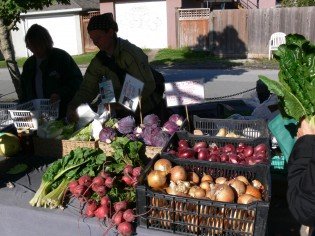 Since I just recently posted my review of the book Mad Sheep whose author is featured in this film, I figured you guys would appreciate this review of Farmageddon: The Unseen War on American Family Farms by Jessica Claire Haney of Crunchy-Chewy Mama. Please click here for the full article. Below I have just pulled out a few favorite paragraphs.

WASHINGTON, June 18, 2011 – Slow Food D.C. hosted the world premiere yesterday of the documentary film Farmageddon: The Unseen War on American Family Farms for an enthusiastic, sold-out crowd. The film, directed by Kristin Canty, tells the story of several family farms that were raided by the FDA and the USDA at great taxpayer expense for questionable reasons.

A mother of four, Canty undertook the project upon being met with disbelief when she talked about raids on small farms. “I told everybody,” she said, “but no one would listen.” Since people didn’t believe that the federal government would spend so much money and time to try to limit consumers’ choices and put small farms out of business through raids, Canty felt compelled to shed light on the issue.

The film and the panel discussion raised the question of the why the federal government would spend so much time and money on small local producers who use sustainable agricultural practices and sell direct to consumers. By contrast, large farms are not required to disclose the chemicals they use, are allowed to grow chickens who live their whole lives in small spaces, and are allowed to plant genetically modified crops that cross-pollinate with organic crops.

One of the farmers profiled in the movie and on the panel following the screening was Linda Faillace, who has documented in her book Mad Sheep: The True Story Behind the USDA’s War on a Family Farm. The sheep farm she ran with her husband and children raided and their herd removed and slaughtered under suspicion of mad cow disease, a disease that has never affected sheep.

Faillace, who calls herself the unlikeliest of activists, has recently completed a screenplay about her ordeal. She said the federal government spent over $1 million on its raid of the Faillace farm.

Before starting his Grassential farm, Matt Rales worked for Polyface Farms with Joel Salatin, who is profiled in the film. Rales echoed the call for consumers to buy directly from farmers and called Farmageddon “the most important of all food documentaries.” Politicians, he pointed out in the panel discussion, often eat from restaurants that serve local and sustainable food; they may not serve conventional food to their children and yet their work supports the industrial food system.