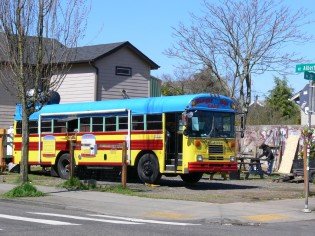 About a month ago we took a quick trip to Portland to check out the food cart scene there that is just off the hook! We had a glimpse of it in November last year when I helped an Uncle move south–we were just there overnight. It was raining so hard at the time we couldn’t stop for any photos of the amazing numbers of food carts all over the place — even in winter! Unfortunately we are on the GAPS diet so we weren’t able to eat everything we saw, we had a buddy with us who did, so we ate vicariously through him.

We did manage to get some home cooked BBQ ribs–they were so delicious! Smoky and large portions of slow cooked ribs. The sauce seemed to have some kind of fruit base, perhaps cherry or blackberry–anyway it was a real treat.

Before we left town we stopped in at Burgers or Bust–a remodelled school bus–around the street from us. The owner was happy to make me a tasty breakfast burger with bacon and a fried egg, and wrap it in lettuce. The meat was grass-fed and I thought I was in heaven. We loved eating in a booth on the old school bus and watching him grill our burgers up in the little kitchen at one end. (Photos) 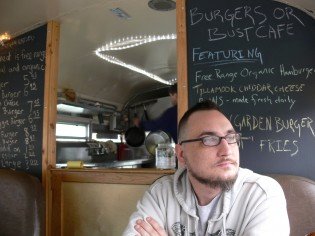 The owner told us a little of his own story after our meal… his house had been foreclosed on and so he had gone into this business. He seemed to enjoy it apart from the problem with the smoke from the grill not having a good outlet and filling up the kitchen. He seemed like a resourceful fellow, so I was pretty sure he had a solution working. He also mentioned setting up a beer garden with a local bar and how he had cut some deal with the lot owner because it had stood empty for so many years. It was clear that Portland’s local food economy was rocking out and drawing in tourists from around the country and the world at the same time. The variety and International diversity represented by these food carts around every corner in Portland is just so fun! What a wonderful way to build community and support local small business. I have heard that Vancouver is looking at what Portland has done with it’s food carts and is opening up its regulations to allow more diversity.

We were lucky to be in Portland in spring and have a chance to hang out in the cherry blossoms by the river as well. What a lovely city! (Check out my short Portland in Spring slideshow here.) My favorite stop, of course was Powells book store, I could spend days lost in there, but I managed to limit it and not even spend that much money. I got a really interesting book called Herbs: The Magic Healers which was written by Paul Twitchell who was an Eckankar master. I had never heard of Eckankar prior to reading this book, but was very interested in the ideas laid out about health and spirituality as well as the type of diet recommended, which seemed very reasonable and similar to the sorts of diets Weston A. Price talked about. Eckankar means “Co-worker with God,” and offers ways to explore your own unique and natural relationship with the Divine. The discussion about minerals and herbal remedies is very good.

I also got an Anastasia book, a book on radiation as well as one on ions. Anyway, you will hear more about that later, for now here is some more information on the food carts of Portland from www.foodcartsportland.com. I can’t wait to go back and try out some more myself. We are lucky it is just a 5-6 hour drive from Vancouver! So delicious–and affordable. 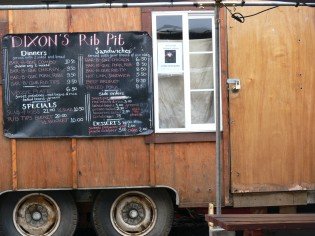 Portland has a proliferation of Food Carts and they seem to be growing in numbers and locations. Some might call them lunch wagons, taco trucks or even snack shacks, but whatever you call them, they are truly a phenomenon in Portland. Set up in parking lots, sidewalks, and even parks (sometimes in large groups and sometimes solo), one might nosh on a fresh tortilla Baja fish taco one day, a rib-sticking bowl of traditional goulash the next, have a coffee and pastry for an afternoon snack, and then take home a giant Indian combo box for dinner.

Locals from various places and committed food-loving tourists from all over know that some of the best food to be had in any city from Bangkok to Baja is to be had at small street stands, carts, and other non-restaurant restaurants. New York City, for example, a city with some great street food, holds the annual “Vendy Awards” to express their love for mobile dining. There is even a website dedicated to street food around the world, although oddly, no U.S. cities are represented. In fact, many cities in the U.S. strictly limit or outlaw food carts completely, making Portland more akin to cities in Europe than in the U.S. 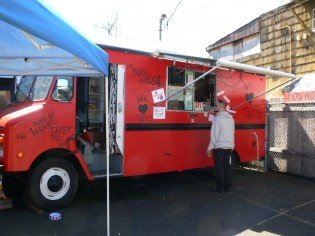 Food carts are also about supporting small, locally-owned businesses and small start-ups that might not have the capital or credit to open up their own full-fledged restaurants. That said, food carts are not restaurants! With limited hours, lack of indoor (and sometimes lack of any) seating, and small menus, they complement rather than compete with full-scale restaurants. Food carts help create a vibrant downtown and central city by bringing what planning geeks call a “social fabric on the street” which is great in cultural terms, but in economic terms also attracts other spenders, retail outlets, and restaurants and cafes. Food carts also often illustrate the delicious benefits to a growing ethnically diverse community, as many immigrants own and operate them and make and serve some pretty tasty ethnic specialties.

Plus, food carts can be a fantastic bargain for office workers, students, budget travellers, and anyone looking for a cheap, quick, but delicious bargain lunch.

Regardless, food carts are part of the culinary fabric of our wonderful city and dining in Portland wouldn’t be the same without them.

Check out this short slideshow of our Portland trip to see more of our food cart dining experience.

This post is part of the Real Food Wednesday bloghop.