“The centralisation of our food system is currently the greatest danger to the food security of our nation.” 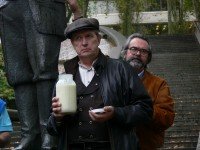 Since I am on the topic of raw milk this week I have to post this very important statement from Michael Schmidt. It was presented at a news conference on the steps of the Alberta Legislature, November 8th, 2010, this declaration is a powerful call to arms to support the small farmer and bring back small farms, and a rejection to recognize officials who refuse to even enter into a discussion:

Agriculture has been the backbone of Canada. History has taught us that a healthy agriculture is able to feed all the people and therefore creates a healthy and socially stable environment.

At the turn of the last century 70% of our Canadian population was actively involved in farming.

Today we have only 2% of the population left working on farms.

80% of them have to have another job to keep their farm going.

The average age of today’s farmers is 56 and hardly any young farmer can afford to start farming.

Corporate farming has taken over food production and multi-national corporations control most of the farming inputs, food processing and distribution.

Food safety regulations and production standards are passed based on intensive lobby powers by those who control the current food chain.

GMO crops, pesticides, fertilizers, drugs and hormones are all part of the corporate controlled food chain.

Most of the traditional rural infrastructure as we know from history has been destroyed as a result.

The centralisation of our food system is currently the greatest danger to the food security of our nation.

Governments have forgotten their mandate to protect our individual freedom, our individual rights and disregards at the same time our ability to act responsible and thoughtful.

I have been watching with great pain the growing corruption and irresponsibility within bureaucracy. Equally disturbing is the lack of courage by elected officials to challenge the same.

The demand from our people for quality locally produced food as result of these dramatic changes is violently opposed by bureaucratic regulators and Government.

Under the pretence of protection it becomes clear that Government has taken a dictatorial approach on behalf of powerful corporations.

This is my proposal today to regulators and elected officials across this country;

I am not here in Edmonton to promote violence and food fights.

I am here to offer my services to negotiate and find solutions.

I am here to mark this day as a turning point.

A turning point because we the farmers, we the consumers, we as concerned people of Canada are officially rejecting those who pass regulations without respecting our fundamental rights, our fundamental freedom to be and act as responsible individuals.

We openly challenge and reject those who blindly enforce unjust laws.

We reject those elected members of Parliament who once promised everything and now refuse to listen and act.

We reject the assault on small farmers under the pretence of food safety threats.

We reject the criminalisation of those who make informed decisions.

I came to Edmonton to protect and personally support a farm family, which got physically assaulted by Government agents.

This family was ordered to stop providing its services to its members. They provided educated and informed members of this farm co-op with their own raw milk.

Raw milk has become the focal point in the Food Rights Battle across North America.

Raw milk will be the breaking point in the Food Rights Battle.

Raw milk is wrongly and intentionally targeted, yet the real danger of today’s food lies in the industrialized food system, which is sanctioned and supported by bureaucracy and therefore by Government.

We have been battling the raw milk issue now for over 16 years.

We have offered the Government more than once our cooperation to explore the legalization of raw milk.

New hope arose for many after this years court ruling in Ontario, which recognized the right of educated and informed private individuals to opt out of the apparent responsibility of Government protection.

Across Canada Provincial Health agencies are now cracking down on cow share operations.

Since it is deemed legal by the courts in Ontario there is no reason why other Provinces could not follow.

I am calling on farmers and consumers alike to join in to openly challenge our bureaucrats and put our elected officials to task.

I will be wherever there is help needed.

I will keep challenging unjust laws.

I will not rest until we have discovered once again our power to resist, to challenge and to stand on guard for Canada and it’s fundamental values of true freedom and responsibility.

I do not want to be asked by my grandchildren; why did you not prevent this dictatorship of thoughtless bureaucrats when you still could?

This Thursday is once again Rememberance day in Canada to honor those who fought and died to defend freedom and fundamental justice.

Our greatest enemy today is not from another country it is from within our country.

This enemy is mostly invisible for many and therefore dangerous and deceiving.

As wisely expressed by Goethe: “No man is more hopelessly enslaved, than he who falsely believes that he is free”.

Let’s have the courage to see and face the real enemy within.

Let’s recognize our strength and our will to battle those who are the real enemies.

Let’s understand that the greatest fear for bureaucrats and Governments are those who have no fear.

Cow Share Canada has done this to protect this family from further aggravation.

Cow Share Canada has set Canadian Standards for the production of raw milk.

If Alberta, if British Columbia or if any other Provinces engages in new court actions or physical attacks against cow share operators without any respect for the individuals choice of food and due legal process, I will once again enter into a hunger strike to activate and encourage more and more people to openly join this battle for our fundamental rights and freedom to choose our food and our health.

It is up to us to change the current destruction of our rights. We cannot wait until our elected officials finally understand that they are serving us.

Click here to cancel reply.
« Shame on You – Fraser Health
Money As Relationship »
We use cookies to ensure that we give you the best experience on our website.
If you continue to use this site we will assume that you are happy with it.