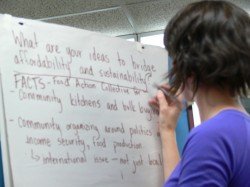 Being a gal who grew up in the heart of the Pacific I have a soft spot in my heart for the Pacific Coast of America and am totally gung-ho for the regional block concept which has been dubbed Cascadia or Salmon Nation. Over the past few years it has become increasingly clear that most of our grandparents and parents have been following ‘maps’ that are generally downright wrong and nothing but destructive to our earth and our health. Being brought up with these cultural concepts makes it difficult to discern what is an unquestioned habit and what is our own deep instinct, but this is a vitally important exercise. My favorite author who really defines how to clarify these ingrained concepts is Derrick Jensen who, from what I have read, is a modern day prophet—in many ways a Martin Luther King Jr of our time (although he is not a pacifist). If you search google for Derrick Jensen and Endgame the results will bring up an interesting video of him discussing what we must do to move forward to create a sustainable world ASAP.

San Francisco has been dubbed the ‘Food City’ of the United States, and set the stage for ‘food justice’ with Alice Waters and her Edible Schoolyard which was established at Martin Luther King Middle School in 1995. After searching the various other main cities of the West Coast I found that all of these cities have strong food justice movements that are working to provide sustainable, community owned and oriented food systems that provide good nourishing food for the most needy and immune compromised as well as for regular folk, like me, who would just like to buy pesticide free food that I can trust on a regular basis. After taking a broader, regional glance at what these various cities are doing, it occurred to me since we are a nation that thrives on competition that setting up a Food Justice Challenge where these cities competed with each other for who could provide the best food rights for their undernourished populations would be a marvelous way to put some more fire under our asses to get the huge corporations out of our food and health systems. I suppose there would need to be certain guidelines to prevent it from getting out of hand as we often end up doing, and to make sure that sharing of new ideas and methods was encouraged between the cities. Perhaps it could also be done on a Nationwide level so the whole region would then also challenge the East Coast or some such thing…please feel free to make suggestions….

In the meantime lets take a quick look at a few things these Pacific Coast cities are up to:

Vancouver has a lot of work to do on getting good fresh food into its food banks, but they have a great community garden push currently, encouraging people to grow their own foods. Vancouver has also developed a Food Charter which outlines the vision of where we want our food system to be. The Farm Folk/City Folk are a great organization that is working towards this.

Village Vancouver is taking a wide variety of steps to build community.

The Community Alliance For Global Justice has a well organized food justice branch which works with various farms, community gardens and community kitchens. They meet every month and are currently working on a community cookbook, they also work with local fishermen. The Cascadian Edible Landscapes helps create community gardens, will plant a fruit tree for your birthday and creates Parking Strip gardens.

Oregon has just set up a program to get food from the farms to old people in particular, they have several food co-ops. One of the main groups working with food justice in Portland is the Interfaith group. Portland is also doing great things in the area of foraging and the community there has set up a map which connects abundant backyard harvests to people as well as great foraging spots.

San Francisco seems to be leading the pack in getting food from farms into their food banks, they have specific people that actively search out and glean food from local farms. SF also set up the People’s Grocery in 2002 which brings fresh food into West Oakland.

LA has an incredible multi-faceted program the Occidental Center for Food Justice, which has programs for Farm to School, Farm to Hospital as well as a Grocery Accountability Program. It also has a bad record with Community Gardens. It was once home to the largest community garden in the world but bulldozed the whole thing down -talk about a waste of resources! It also is known to uproot guerrilla gardens for no good reason. There is a very good film of this insane action called The Garden.

This list is just a quick overview of each of these cities, all of them have a lot more going on in them, please feel free to add your favorites in the comments section!

The mother of the Food Sovereignty Movement: La Via Campesina
Food Justice Coalition
Article explaining, history and definition of Food Sovereignty:
http://stuffedandstarved.org
US Food Crisis Group
WHY is dedicated to fighting the root causes of hunger and poverty by supporting grassroots organizations that create self-reliance, economic justice, and equal access to nutritious and affordable food.