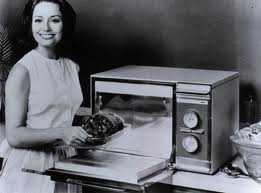 I was looking through some old posts and suddenly came across this old draft that for some reason I never published. I don’t know why–sorry about that! I recently spent the week on a biodynamic craniosacral therapy course that was held in downtown Vancouver. I don’t often spend much time down there, but I decided to try out some of the restaurant and cafe’s in the area, figuring I could eat soup and that shouldn’t be so bad. I have been on the GAPS diet for a year now so my digestive tract is in much better condition than it has been in years, but it still needs to be treated gently. Unfortunately I forgot about the microwave. In many of these cafe’s they would instantly zap your wonderful food in a microwave without a second thought for what they were doing. I also forgot that many places don’t make their own stocks, but simply use MSG based imitation bouillon powders. Needless to say, I wasn’t feeling too good by the end of the week!

I posted an article on cellphones, which also have the same sorts of electro-magnetic frequencies. I have also heard Sally Fallon Morell mention that a certain type of fat (arachidonic acid) can help insulate you if you have a sensitivity to EMF’s. I have personally found that my own sensitivity to EMFs seems to be related to how healthy my digestive system is. As my helpful bio-film of probiotic micro-organisms develops along my mucous membranes, and my kidneys and liver improve their detox capabilities, I am a little more resilient–although I still do whatever I can to avoid and lessen exposure to them.

I have been perusing second hand stores since before I was born (my mom loves them too)–the bookshelves are one of my favorite sections. You never know when you will find a gem for 50c. I have noticed more and more microwave cookbooks in cooking sections lately. In fact in some places that is the only type of cookbook there. It doesn’t really surprise me, the microwave was a big fad for a while and although it may be common-place in western homes these days, many people rejected them on pure instinct years ago.

I read this very interesting article about it, did you know that in Russia, microwaves were banned in the 70s? I have pulled out some of my favorite bits, but it is well worth it to read the whole article for yourself, you can find it here.

Saran wrap and its imitators also drip chemicals into microwaved food that can cause cancer and sterility. This was known 10 years ago, when 10th grader Claire Nelson teamed with the FDA-affiliated National Center for Toxicological Research in Arkansas. Testing four different plastic wraps, Nelson and her scientist helpers found DEHA migrating into microwaved food at levels 10,000-times FDA permissible levels.

They also identified Xenoestrogens being released from microwaved plastic wraps into food and the people eating it. Xenoestrogens are linked to breast cancer in women and plunging sperm counts in men. [Options May/00]

Even microwaving bare-naked vegetables is dangerous. Once upon a time quite recently, 20 volunteers divided into two groups fasted for 10 days before eating the same foods. The only difference was the veggies eaten by one group were steamed; the others microwaved. After 10 days, stool samples were taken.

Group A had normal poop. The microwave munchers in Group B produced some truly weird shit – with a “plastic texture”.

Medical scans showed the enzymes and proteins in the microwaved food they’d consumed so molecularly disfigured, they could neither be recognized nor absorbed by their bodies. Ultrasound analysis of 10 troubled tummies also showed plastic particles from the plastic-walled microwave ovens stuck to all 10 colons! [Hebrew News Today]

The Federal Research Centre for Nutrition in Germany also found that exposing food to microwave oven radiation leads to the formation of “unique radiolytic products” that can cause serious health problems. One such chemical, known as 2-DCB, causes “significant DNA damage” – in the colon.

It turns out that just like modern cell and portable phones, microwave ovens operate at 2.45 Gigahertz. This means that the electromagnetic waves from these appliances whip every cell within range back-and-forth 2.45 billion times every second. Call it Shaken Cell Syndrome. No cell membrane can withstand such wicked whiplash. Inside the double-strands of DNA, either one or both strands fail.

Adding to their growing panic, the molecular alterations in microwaved food also cause the lymphatic system to malfunction, sharply reducing the ability of the body to protect itself against the cancerous growth triggered by microwave cooking.

The Russians call it, “microwave sickness”. Studying thousands of radar workers exposed to microwaves during the 1950’s, the Kremlin found health problems so severe, it imposed strict limits of 1 microwatt/square-centimeter for civilians. Higher-dosed soldiers are expendable.

If people around you are acting brain damaged, it’s because they are. Nearly 50 years ago, Russian scientists discovered “brainwave disturbance” in “persons exposed to microwave emission fields.” Within minutes, this electromagnetic interference leads to memory loss and inability to concentrate. Depression, “incoherent thoughts” and interrupted sleep often follow.

But what really blew their minds was that eating microwaved food also “shorts out” electrical impulses in the brain and de-magnetizes brain tissue – leading to the same memory loss and attention disorders, increased irritability, depression, disconnected thoughts and sleep disturbances sparked by microwave fields.

The Russians further found that the resulting “degeneration and circuit breakdowns of electrical nerve impulses” from microwaves and microwaved food also occurs in the central and autonomic nervous systems that govern virtually every activity in the human body.

Microwave malnutrition is guaranteed. Dr. Radwan Farag of Cairo University has found that just two seconds of microwave energy exposure destroys all enzymes needed for digestion. The result is profound “dis-ease” as microwaved food loses its vitality and can no longer nourish nutrient-starved bodies. [Pediatrics Apr/92; Journal of the Science of Food and Agriculture Nov/03; unhinderedliving.com; cdc.gov]

Malnourished people tend to pack on the carbs.

When pediatrician John Kerner Jr. witnessed neonatal nurses routinely heating breast milk in a microwave oven, he became concerned. Utilizing a Stanford University lab. in 1989 Dr. Kerner and his co-workers were astonished to find that breast milk microwaved at low settings not only lost its nutrients and digestive enzymes – it also fostered the growth of potentially poisonous bacteria, even as it lost the antibodies used to fend off those microbes! [Science News Apr 25/92; Pediatrics Apr/92]

Abrupt changes following the consumption of microwaved food include a decrease in HDL (good cholesterol) and a sharp rise in LDL (bad cholesterol). There are also significant decreases in red blood cells carrying oxygen to tissues, as well as infection-fighting white blood cells. These are often signs of “poisoning and cell damage,” Hertel and Blanc noted.

“The oxygen of water molecules reacts most sensitively,” he also found. This is especially disturbing, since human bodies are mostly comprised of water and require full oxygenation for good health.