All Hail the Legume

Respect to the Bean 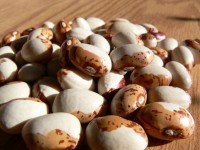 I recently had a request for information about beans. I think actually it was more a request about how to cook dried beans than these sorts of facts! For details on soaking beans check out this recipe for refried beans. In the meantime let your mind be titillated with these bizarre bits about beans.

Legume family: Fabaceae (or Leguminosae). The third largest family among the flowering plants (after the orchid and daisy families), and second most important to the human diet, after the grasses.

Sources:
On Food and Cooking: The Science and Lore of the Kitchen

Click here to cancel reply.
« Natural Diet – Masanobu Fukuoka
Sugar is More Dangerous than Smoking »
We use cookies to ensure that we give you the best experience on our website.
If you continue to use this site we will assume that you are happy with it.