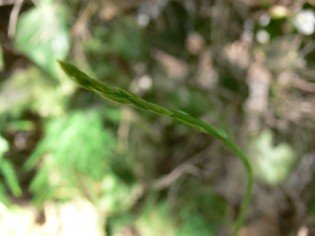 Considering that the movement towards sustainable living is picking up speed, no discussion of asparagus would be complete without mentioning Euell Gibbons and his original back to the Earth foraging book Stalking The Wild Asparagus (1962). Euell Gibbons learned how to forage from his mother and was able to support his family with those skills during the dust bowl era of the 1930s. When I first read his book it inspired me to take a course in identifying wild herbs at Wellpark College and soon I was walking the streets of Auckland, my eyes intently focused on the ground, trying to figure out what these plants were that I had never noticed before. One of the first ones that I put a name to was Shephard’s Purse, which has such unique heart-shaped leaves it is an easy one to pick out—suddenly I was seeing it everywhere. Since that day, my list of plants I can confidently identify has slowly but steadily grown. I enjoy this sort of collecting, the collecting of plant names, it is free, doesn’t take up space and organizes the jumble of images and information rumbling through my senses to my brain.

Asparagus is another of those plants that happily spreads with the help of birds and has naturalized around the world. It is now declared an invasive weed that smothers native plants. In spring new shoots of asparagus shoot up from the earth, very rapidly—from 6-12 inches in 24 hours, this is when they must be harvested. The window of opportunity for foraging these tender spears only lasts around 4-6 weeks. Asparagus loves to grow in sunny, moist but well drained areas—particularly by roadsides, electric poles, and on the banks of creeks or ditches. Wild asparagus is naturalized garden asparagus, although they taste much better that the commercial variety, and when freshly harvested the nutrients and minerals don’t get much chance to deteriorate. An important thing to consider when foraging is to avoid areas where herbicides have been sprayed to kill weeds (I have been violently ill on occasions when I harvested plants that had been sprayed with a deathly chemical). Asparagus is very good for detoxing in the spring, so for anyone with a bit of gumption, get out on a tramp and track down some asparagus. Not only will this help the native flora, but it will also be a refreshing boost for your own body, as the toxins built up from the winter wash out of your system. 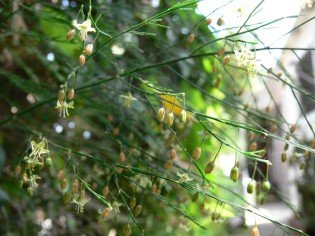 Asparagus is native to Europe and was a favorite dish of the Romans who cultivated it extravagantly. They loved this delicacy so much they had an Asparagus Fleet for rapid transportation to their dinner plates when harvested, they even shipped it to the Alps to freeze, so they could enjoy it out of season. Roman soldiers introduced it to the British Isles (and elsewhere) where it was called sparrow-grass. Asparagus has now naturalized all over the world. Asparagus is a member of the lily family as are onions and leeks and is a relative of the grasses. Asparagus propagates through it’s roots as well as it’s seeds. Once you have discovered (or planted) a patch of asparagus, remember where it is as you will probably be able to harvest the same spot for years. For people who are unfamiliar with an asparagus plant, the plants may be harder to spot in spring. Asparagus plants look nothing like an asparagus spear and more like little weedy Christmas trees, lacy and delicate. The fruits that grow on them turn red at the end of summer, making the plants easier to identify at that time. In the spring, look for the dried plants, at the base of there will be new sprouts shooting up, very similar to fiddlehead ferns. The wild asparagus are usually classified as Asparagus officinalis spp prostatus and they creep lower than the garden variety, which makes them more difficult to recognize when out foraging. Once you know what to look for and the conditions they like, they become easier to find. 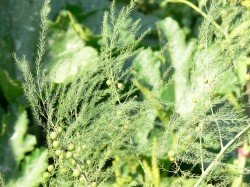 Asparagus has been used in Traditional Chinese and Ayurvedic medicinal systems for thousands of years. It is astringent, sweet, bitter, light, cool and moist. The Ayurvedic system uses it as a mild laxative, cardiac and nerve sedative, tonic, aphrodisiac and demulcent. It is one of the few vegetables that can be eaten by all doshas. It stabilizes Vata, lightens and stimulates Kapha, cools and calms Pitta. It is also considered to be one of the Sattvic foods, working to purify the body and calm the mind. It is closely related to Shatavari (Asparagus recemosus), an Ayurvedic herb generally used for supporting the reproductive systems of both men and women as it contains the steroidal glycoside asparagoside. It cleanses, balances and detoxifies, stimulates lactation, alleviates menopausal and menstrual symptoms, and enhances fertility for both men and women. Asparagus officinalis shares many of the same properties, which may account for the renown asparagus has around the world as an aphrodisiac. The Chinese call the root tian dong and use it for lowering blood pressure and as a spirit and yin tonic, as it enhances love and compassion and opens the heart. It is also a lung tonic, cleaning and clearing out the respiratory tract among other things. 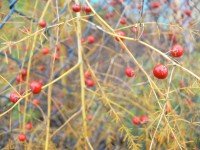 For a vegetable so low in calories, asparagus is mightily packed with vitamins, nutrients and phytochemicals. In six stalks of asparagus there is about 500 I.U of vitamin A, 15 milligrams of vitamin C and 160 milligrams of potassium. There are also high levels of the vitamin B family including niacin, B12, B6, B5 and folic acid, iron, calcium, phosphorus, magnesium, zinc, antioxidants rutin and glutathione, the amino acid asparagine and the carbohydrate inulin and many more. As everyone knows, asparagus is good for the kidneys, being a strong diuretic, which also helps to wash uric and oxalic acid out of the body by breaking up the crystal deposits of these acids in muscle tissue and joints. Asparagus is also helpful for rheumatism and arthritis. The roots, seeds and spears are used for urinary tract infection, preventing kidney stones, reducing inflammation, dropsy, gout, as an aphrodisiac and to lower blood pressure. The seeds have anti-biotic properties. 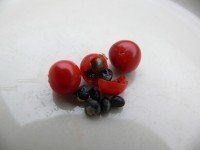 When cooking asparagus, use as little water as possible, and steam or boil it. Depending on how thick the stalks are, they need very little time in the water. The water should be consumed, as many of the heath giving properties of asparagus are water soluble and will end up in the water. Asparagus can be preserved by lactic acid fermentation which is an energy saving alternative to freezing for preservation. Canning asparagus under high heat is generally counterproductive and will destroy most of it’s healing properties. Asparagus is a good vegetable to start with if you are new to lacto-fermentation because of the carbohydrate inulin, which our gut friendly bacteria, in particular the lactobacilli like feed on.

With the recent resurgence of interest in fermentation, there has also been a lot of fear-mongering about the dangers of unsanitary fermentation. Micro-organisms are not a joke so be sure to wash your hands and equipment with soap, but lacto-fermentation is actually safer than canning for the inexperienced beginner as there is less chance of contamination with unwanted bacteria. Lactobacilli colonize even more rapidly when feeding on inulin, leaving no room for unfriendly bacteria such as botulism or salmonella.