We are all addicts of fossil fuels in a state of denial, about to face cold turkey. -Kurt Vonnegut

With 46 million turkeys eaten at Thanksgiving (690 million pounds of flesh), and 22 million at Christmas, the turkey literally becomes a part of us during holiday season. The bird is unique to America, and examining our relationship to it throughout our history demonstrates the schizophrenic nature of how we interact with the ecosystem that supports us. An apt example of this is Sarah Palin’s speech after her turkey “pardoning” ceremony, given in front of a bloody turkey slaughtering tub: youtube

A Bolivian friend bought to my attention the Presidential Turkey Pardoning event that takes place prior to Thanksgiving. Despite determined attempts to find out what the turkey is being pardoned for, I found nothing, proven or alleged, about crimes committed by turkeys. I was excited to read an article about a turkey attacking President Bush, causing him to be evacuated from the White House, but soon noticed the source was The Onion and therefore highly unreliable.

The popular notion that the Presidential Turkey Pardoning ceremony was started by President Truman is also malarkey. It has been suggested President Kennedy triggered the event when he spontaneously declined to eat the turkey given him by the California Turkey Advisory Board. This happened a couple days before his assassination, leading me to wonder if links between this group and the murder have been explored. Actually, this bizarre scape-turkey ceremony was begun by President George H. W. Bush in 1989, and will hopefully be discontinued – even turkeys should be considered innocent until proven guilty. 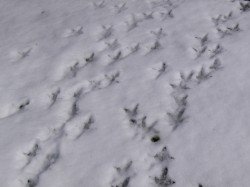 Wild turkeys are a very different bird than the ones currently carved up for the pleasure of family and friends, and were abundant in the 1600s. By the 1930s, less than 30,000 wild turkeys remained in the country, a result of extravagant hunting and clear-cutting of forests. In 1937, the Federal Aid in Wildlife Restoration Act was passed, taxing hunting equipment and putting the dollars into conservation and habitat enhancement programs. The National Wild Turkey Federation was established and after unsuccessfully attempting to release pen-raised birds into the wild, brought back wild turkeys with trap and transfer programs initiated in the 1950s. The main program began with nine wild turkeys! This program was supported by hunters as well as conservationists, as a result it is perhaps the most successful conservation program in history. Today there are more than 7 million wild turkeys. This is an outstanding example of what can be accomplished if we all work together.

In the meantime, domesticated turkeys were being subjected to all types of abuses. Yamhill County, Oregon originated the genetic breeding that created the modern huge breasted turkey. These turkeys become so large their legs cannot sustain their weight, they can no longer breed naturally and must be artificially inseminated. Going further back in time, we find a favorite children’s song Turkey in the Straw originated from the tune Old Zip Coon, a regular feature in George Washington Dixon’s minstrel act in the 1830s around the time President Jackson was tussling with the Second Bank of the United States – a private corporation and Government-sponsored monopoly, Jackson charged the Bank with undue economic privilege.

Also popular in our early history were “turkey shoots” unsporting events where live turkeys were tied down and shot at, the shooter who killed the turkey received it as a prize. There were many varieties of these turkey shoots, including the “turkey run” where the turkey ran down a cage while participants shot at it. These events have been mostly driven out of practice by animal rights groups. The term “turkey shoot” has since become a term used in military events – referring to an enemy caught off-guard and out-gunned in an unfair manner.

Another bizarre tradition sprang up in 1946 in Yellville, Marion county, Arkansas when returning veterans decided to re-create “turkey drops” seen in Italy, a tradition that goes back to 1506. Poet Baldassare Castiglione in his “Tacchino”, describes how three turkeys are dropped from the top of the Palazzo Ducale, two of them are torn to shreds when they reach the ground by the crowd of peasants, the third escapes by flying to the top of the Duomo, where it seeks the protection of St. Francis of Assisi. The Yellville festival gained popularity and in 1977 planes were used to drop 30 turkeys, 9 of these birds failed to fly and died when they hit the ground. This spurred the TV sitcom WKRP, Cincinnati to spoof the event. Yellville quickly withdrew official sponsorship. Retired USAF Lt. Col. Tommy Thorson, came to their rescue, opening Tommy’s Turkey Training Farm. Turkeys are trained in the military skill of HALO – High Altitude, Low Opening. These trained turkeys are packed into an airplane and dropped from 2,500 feet over Yellville. The birds perform various maneuvers and at 150 feet, they open their wings and land in the town square. The term “turkey drop” now refers to what often happens when freshmen, after promising their love to remain true forever, return home from college for Thanksgiving and take the opportunity to break up with their darling in person.

Another well-used term is cold turkey, there are various theories to how this originated, my favorite is that it came from the pale, goose-bumped skin of a heroin addict going through withdrawal.

As more people realize the disconnected and abusive nature of industrial and factory farms, free range and “heritage” turkeys are becoming popular for our communal feasts. Recently, a wild turkey had a “turkey shoot” of it’s own. A hunter, thinking he had killed the bird put it in his car with a loaded gun, as he removed it later, it began struggling, hit the trigger of the gun and shot the man in the leg. Nature seems to be fighting back against our species-centric, exploitive practices.

Click here to cancel reply.
« Movie Review — GOOD FOOD
Declaration for Healthy Food and Agriculture »
We use cookies to ensure that we give you the best experience on our website.
If you continue to use this site we will assume that you are happy with it.