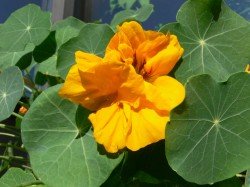 Tucked away in my memory lies a happy scene which we probably all share: a patch of bright yellow and orange nasturtium flowers surrounded by their round dollar leaves. Squatting down you reach out and pick the long funnel off the back end of the flower and suck out the nectar, “Ummmm yummy,” you say as you reach out to pick another one and give it to your younger sibling (nephew, grandchild, daughter), “try that.” You watch the expression of happy surprise on the face of the child as they eagerly reach out and pick their own colorful nectar filled funnel. This simple act has occurred for generations around the globe ever since the colorful nasturtium flower was first brought back to Europe from their native habitat, the Andes. Very easy to grow and a wonderful companion plant for gardeners, the zesty Tropaeolum majus quickly circumnavigated the globe and can now be found in every country.

The multicolored flower we know as nasturtium is said to have gotten it’s name from the family Nasturtium which is a genus of the Brassicacea (cabbage) family. Watercress (Nasturtium officinale) is the edible plant of this family and contains the same mustard oil (Benzyl isothiocyanate), which causes the tangy taste in the nasturtium flower. The properties and therapeutic uses of these two plants are therefore very similar. One difference is that the bright colors of the flowers also contain the powerful antioxidant anthocyanin, which we have heard a lot about over the past couple years as a highly effective free radical scavenger and cancer preventer.

Anthocyanins are a type of flavonoid, and were eaten in large amounts by early humans as they are especially found in colorful berries. They are said to have the strongest physiological effects of any plant compound. They are what creates the pigments in pansies, plums, tomatoes, blueberries and nasturtiums among other things. Because of these powerful antioxidant properties they have also been used as natural food-coloring or dyes. Their anti-inflammatory ability helps to protect the nervous and circulatory systems. They not only neutralize enzymes that destroy connective tissue, but they also repair damaged proteins in blood vessel walls. As a result they can be helpful for allergic conditions as well as for eyesight and diabetes. Some researchers suggest that modern humans are deficient in anthocyanins. Therefore feel free to toss the colorful flowers to salads, stir them into soups or steep them in home-made raw-honey vinegar.

The Chinese have a very simple soup recipe which contains three ingredients, watercress (or nasturtiums), dried red honey dates and blanched pork ribs (chicken stock can be substituted). These are simmered for a minimum of four hours, while skimming off any scum that rises to the top. This recipe is used for detoxing the body in winter or spring and is especially effective for removing toxins from the lungs. It is recommended that smokers eat this soup every two weeks and is very helpful for people who breathe in a lot of air pollution from sitting in traffic. The soup is also very good for any urinary tract, bladder and kidney problems. Not only does it detox the body but it also has antibacterial and anti fungal properties which clean the system of thrush or other issues. It is much easier to get a hold of watercress in local stores in the wintertime than it is to get edible nasturtium flowers, but the flowers do very well as container plants and can be grown indoors all year as a kitchen herb, all parts are edible from the flower to the seed pods.

Aside from being a cheerful color around the home and having a plethora of uses for healing, one of the other great things about nasturtiums for urban gardeners is that aphids love them and will leave your other plants alone. I experienced this firsthand over the summer when my lovely nasturtium was suddenly overrun and killed off by more aphids than I ever imagined could fit on one plant. I suppose I should be grateful that my other plants were spared, but I was still rather sad to see my poor plant overtaken by these tiny pests.

There is a beautiful rumor about the unique and beautifully round and green leaves and the bright orange flowers of the T. majus nasturtium which the daughter of Carl Linnaeus and even Goethe have observed. They said that the leaves and flowers have the property of phosphorescence, and will even go so far as to actually emit electric sparks or flashes which are generally observed in the dim light of dusk. I personally have never seen such a thing but it was stated that “the whole leaf seemed to twinkle with points of light” (Phosphorescence p 80-82 by Thomas Lamb Phipson 1862)

In Peru, the original home of these beautiful flowers, the whole plant is an important component of their herbal medicine and was used as a disinfectant, to heal wounds, as an expectorant, for bronchial catarrh and as an antibiotic. A simple infusion of the leaves increases resistance to bacterial infections and is also anti-fungal and antiseptic. It is also used as a diuretic, emmenagogue, laxative and stimulant. The plant has high amounts of vitamin C as well as the above mentioned antioxidant anthocyanins. Extracts from the plant have been found to have anticancer activity and has also been used to treat scurvy and arthritis, and is used topically for poor skin and hair conditions (rub a tea of nasturtium into your scalp to prevent hair loss). There is also another species of the Tropaeolum family, T. tuberosum, called Mashua in South America, which produces a tuber that is an important part of the indigenous diet. The root is small and yellow and is said to taste peppery, also due to the mustard oil. The root is generally boiled, or may be freeze dried in a traditional technique of stamping on various tubers and then leaving them out to freeze over night, and then in the sun the next day. This process is repeated for a few days, but is only possible in the high elevation of the Andes. This is only one of a variety of tubers used in the traditional diet. It is also used in barter for maize which cannot grow at such high altitudes. 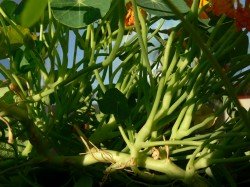 Nasturtiums were introduced into central Europe in 1684 by the Dutchman Bewerning and have been used in German herbal medicines since that time, generally in combination with other herbs as the Benzyl mustard oil is a strong substance and can cause irritation to delicate systems. Once again the antibiotic and anti fungal properties are highlighted, being very useful for the prevention of influenza and other inflammatory conditions. It is also used for strengthening the female organs, as a tea for mouthwash which is useful for all kinds of dental and gum diseases, for joints, rheumatic arthritis (also from the high levels of vitamin C), for minor muscle aches (applied topically), for gastric and intestinal ulcers and for neuralgic diseases. Also highlighted is the herb’s remarkable affinity for assisting the respiratory and urinary systems, removing harmful bacteria and yeasts as well as harmful toxins. It is also used as a general tonic and stimulant and to boost the immune system.

One of my favorite champions of the home-fermentation revolution is Sandor Ellix Katz who offers a method for creating nasturtium capers with the ancient technique of lactic acid fermentation. I have used this recipe for dandelion and milkweed buds as well as for cocktail onions. It makes fantastic peppery capers while at the same time raising the already high vitamin C content of the nasturtium seed pods (Semen tropaeoli). This recipe is adapted from his book Wild Fermentation

Take advantage of this spicy flavor as well as the decorative color. Use both leaves and blossoms in salads. Try adding them to spinach salads for a dramatic effect. Nasturtium’s spiciness is also a winning addition to cheese spreads. Both the leaves and the blossoms look and taste great in tea sandwiches. For a stunning look, pair orange nasturtium blossoms with violets on open-faced cucumber sandwiches on white bread.

This genus, native to South and Central America, includes several very popular garden plants, the most commonly grown being T. majus, T. peregrinum and T. speciosum. The hardiest species is T. polyphyllum from Chile, the perennial roots of which can survive underground when air temperatures drop as low as -15°C (5°F).

Chinchero people treat Tropaeolum tubers so that they will “taste good.” Tubers must be left in the sun for two days if dug up at harvest time (in June) or for two weeks if dug up earlier in the year.

The excellent free radical scavenging activities along with high phenolic and ascorbic acid content of Nasturtium flowers suggest that they could be source of natural pigments and antioxidants for applications in functional foods.


Eaten in large amounts by primitive humans, anthocyanins are antioxidant flavonoids that protect many body systems. They have some of the strongest physiological effects of any plant compounds, and they are also things of beauty: anthocyanins provide pigment for pansies, petunias, and plums.

This particular species, T.majus, has been credited not just with exhibiting the property of phosphorescence, but of having the power of actually emitting, in certain atmospheric conditions, electric sparks or flashes both from the leaves and flowers.

Benzyl mustard oil (benzyl isothiocyanate) obtained from Tropaeolum majus has, in vitro, a bacteriostatic, virustatic and antimycotic effect. Mustard oil is accumulated and excreted mainly in the respiratory and urinary tract.

Nasturtium has long been used in Andean herbal medicine as a disinfectant and wound-healing herb, and as an expectorant to relieve chest conditions. All parts of the plant appear to be antibiotic and an infusion of the leaves can be used to increase resistance to bacterial infections and to clear nasal and bronchial catarrh. The remedy seems to both reduce catarrh formation and stimulate the clearing and coughing up of phlegm.

The oil extract from nasturtium is 20 times more effective than the synthetically produced analogue. Leaves of Tropaeolum majus L. contain high amounts of the glucosinolate glucotropaeolin. They are used in traditional medicine to treat infections of the urinary tract. When Tropaeolum leaves are consumed, glucotropaeolin is hydrolyzed to yield mustard oils, which are absorbed in the intestine and excreted in the urine, exhibiting their antimicrobial activity. Used as a general tonic and stimulant.

The glucosinolate glucotropaeolin is what causese the aroma of the plant.