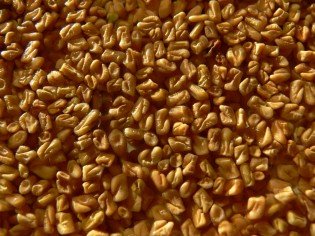 Fenugreek: (Trigonella foenum-graecum) called methi in the Ayurvedic tradition, has been a trusted friend of mankind for a long time, perhaps even before crops were cultivated. It is widely used in Ayurvedic medicine and cooking, which dates back at least 4,000 years. The Ayurvedic philosophy of life comes down to us from the mysterious but sophisticated culture that flourished in the Indus valley and worshiped the Mother goddess. Fenugreek is especially renowned, in this tradition, as a warming digestive herb and galatagog.

An interesting property of fenugreek is it’s affinity for certain wild yeasts, which are beneficial to the digestive tract as well as being useful in the fermenting process of making traditional dosas or idlis, by attracting wild yeasts to the batter. Fenugreek is a great adaptogen, and its supportive function in the intestine cleans out impacted matter in the mucous membranes while adding a protective gum of it’s own to the walls of the intestine. The mucilagins in fenugreek (galactomannans) stimulate production of fluids, which also flush allergens from the respiratory tract, making it useful for treating bronchitis and congestion. It also reduces fevers and relieves inflammation. These gentle properties of both the seed, sprouts and the greens of fenugreek, are vital for modern urban dwellers. In fact, according to the Ayurvedic tradition, these properties also help with arthritis by cleaning out toxins accumulating in the fluids around the joints. 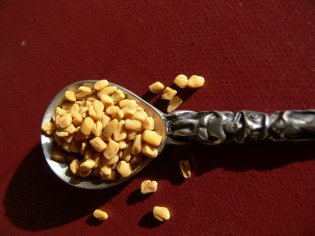 Fenugreek is easy to sprout and the sprouts make a spicy, crisp addition to any meal. Soaked in water and rinsed periodically for 4-5 days, fenugreek sprouts are high in vitamin A, C and B as well as iron, calcium, silicon, selenium and high levels of protein, most notably the amino acid 4-hydroxyisoleucine which increases production of insulin when blood sugar is high, making it very useful for treating diabetes. A strange side effect of sprouting fenugreek is the strong maple syrup (with celery undertones) aroma the seeds release as they soak up the water. Fenugreek is also used to make maple-syrup flavor, which has caused outbreaks of distress in New York City since it’s first mass smelling in Ocotober of 2005. Old fashioned Vermont Sugar Houses, laughed knowingly as New York even went so far as to develop a commission to investigate the aroma, which was smelled all over the city. It has finally been revealed (February, 2009) that the aroma was coming from New Jersey where they were making imitation maple syrup essence.

Fenugreek is also considered to be effective in weight loss while significantly reducing cardiac risk factors, these effects are linked to the galactomannans, which are soluble fibers in fenugreek that bind to dietary fat and reduce its absorption into the body. The daily dose recommended by Germany is 6 g of fenugreek powder soaked in water and drunk. It is also used by body builders, as 4-hydroxyisoleucine helps the body maintain a healthy liver while bulking up on a diet high in fruit and carbohydrates, this is another aspect of fenugreek’s blood sugar regulating properties. Fenugreek helps the liver assimilate fructose efficiently. Fenugreek is made into a tea in various countries and in Egypt is often drunk in winter. It warms the digestive system, while helping to remove toxins and providing extra vitamins and minerals that boost the immune system during the dark winter months.

Nikolai I. Vavilov (prominent Soviet botanist who identified the centers of origin of plants) thought fenugreek originated around Central Asia, Assam, and Burma. Fenugreek is one of the three well-known host plants of the bacteria sinorhizobium meliloti. This bacteria is known for the symbiotic relationship they form with their host plants. They enter the root tissues and form nodules where atmospheric nitrogen is converted to ammonia. Fenugreek’s ability to fix nitrogen as well as being a galactagog, have made it useful in agriculture for the land, as well as for cattle fodder. In present day urban living, people who are doing container and micro-gardening, may find that fenugreek is a great companion plant, adding nitrogen to the soil, and lowering the need for fertilizers, while at the same time providing healthy greens and seeds for meals.

As we all know, the quality of milk depends on what the animal has eaten. There is a recent upsurge in understanding the benefits of grass-fed milk and dairy products. New Zealand butter is famous worldwide because it mostly comes from pasture fed cows. Drinking milk from a cow fed with fenugreek, alfalfa, and clover would have many of the healing properties of the herbs as well. Interestingly, fenugreek has been used as a substitute for cod-liver oil in the treatment of rickets, as it has surprisingly similar properties. In India, fenugreek seeds are often added to yogurt. 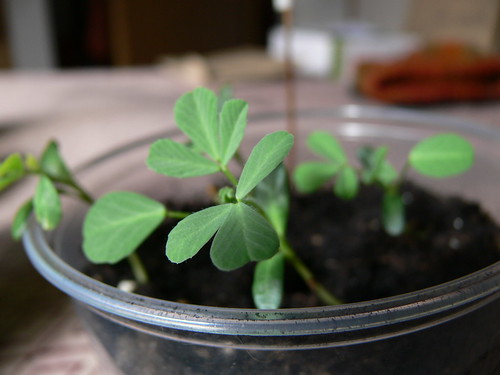 Fenugreek has been a companion of mankind for longer than any of us remember, in fact it seems to have been used almost as much in Western traditional medicine and agriculture as it was in the Ayurvedic tradition, but then forgotten. Looking through Western-based herbal books there is a strange absence of fenugreek, which is currently making a reappearance. If we follow the law of similarities, or simply have respect the spirit of fenugreek, we notice that fenugreek is trying to get our attention, what with it’s aroma-assault on New York City for the last 4 years. Fenugreek wants to help heal and support us in our processing, digesting and nurturing of each other and our world.

The Book of Jewish Food: An Odyssey from Samarkand to New York

by Claudia Roden has a very interesting recipe for Fenugreek Jelly. (This is a fantastic cookbook, by the way, and even includes a Burmese Jewish recipe — probably one of the only cookbooks in the world to do that!)

This unusual jelly is used to make a relish which is eaten with bread as a dip and is much loved by the Jews of Yemen and Aden, and in a different version by the ‘Baghdadis’ of Calcutta. The relish is present at most meals, and especially on Friday night and Saturday lunch. Its slightly bitter flavor and gelatinous texture derive from fenugreek seeds. The flat square yellow-brown seeds need to be crushed or ground, they need to be soaked to remove some of the bitterness and to develop the gelatinous texture.

To Prepare
Pour plenty of boiling water over the ground fenugreek (2T absorbs a large quantity of water and gives you a large amount of jelly), stir well, then let rest for at least 2 hours but preferably overnight, by which time a gelatinous mass will have settled at the bottom, leaving a clear liquid on top. Drain all the liquid off without disturbing the gelatinous substance. Now beat in about ½ c of water, drop by drop, until the mixture is light and foamy. This can take ten minutes by hand.

I made this recipe a year ago but to be honest I wasn’t really sure what to eat it with because at the time I wasn’t eating bread. It is often mixed with Zhoug and used as a condiment or dip for bread, anyway, now that I know all these amazing characteristics of fenugreek I will have to try it out again.

Information about fenugreek for diabetes
http://findmeacure.com

Fenugreek seeds contain chemicals that slow down the time that food takes to go through the intestinal tract. As one result, sugars are absorbed from foods more slowly and blood sugar levels may not rise as high or fluctuate as much as usual.

Information about fenugreek for the heart
http://www.medicinehunter.com

In one human study, 2.5 grams of fenugreek per day for 3 months significantly reduced these cardiac risk factors. These activities are linked to a group of soluble fibers, most notably galactomannans. The galactomannans also possess fat-sequestering properties, binding directly to dietary fat and reducing its absorption into the body.

One of the most valuable legumes was the plant tiltan (a name used today for clover), fenugreek, Trigonella foenumgraecum. Its leaves were grown for fodder and its seeds eaten when green or hard.

How to make South Indian Dosa or Idli Batter
http://www.indiacurry.com

Obviously, this is a viable alternative to introducing endogenous insulin and much safer as well for those of you looking to assimilate vast quantities of carbohydrates post workout but have propensity for insulin resistance.

Properties of fenugreek:
http://www.theepicentre.com
“Fenugreek stimulates the production of mucosal fluids helping remove allergens and toxins from the respiratory tract. Acting as an expectorant, Fenugreek alleviates coughing, stimulates perspiration to reduce fevers, and is beneficial for treating allergies, bronchitis and congestion. In the East, beverages are made from the seed to ease stomach trouble.”

Lucky Fenugreek
http://www.indianmirror.com
“To draw cash to your home, keep a few fenugreek seeds in an open container on the kitchen table. Put out new seeds each week and add the old ones to the scrub water with which you clean the kitchen,…”

It is said that steroid saponin contained in fenugreek testa is a precursor of female hormone and it is turned into female hormone in the body that enlarges breast and increases milk.

While numerous calls were placed to the city’s 311 non-emergency complaint hotline on days when the odor was noticed by New Yorkers, the Mayor and the New York City Department of Environmental Protection have determined that the smell is not harmful.

History and other interesting tid-bits
http://www.absoluteastronomy.com
“Charred fenugreek seeds have been recovered from Tell Halal, Iraq (radiocarbon dating to 4000 BC)…”

Click here to cancel reply.
« Sugar and Intuition as Monsanto Strikes Again
Stone Soup Festival 2009 »
We use cookies to ensure that we give you the best experience on our website.
If you continue to use this site we will assume that you are happy with it.