The Pleasures of Fennel 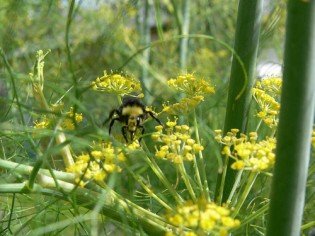 I remember the first time I had a chance to get to know wild fennel. It was growing tall and wild behind an empty lot I walked through every day on my way to work at an Italian restaurant in the Viaduct harbour in Auckland, New Zealand. It’s funny to look back on that period in my life and realize that I have a clearer memory of the walk to work than the job itself. This is simply because those fennel plants were so delighted to have me walk through them every day. I inhaled in their aromatic sunshine on the way to work in the morning and felt supported by their feathery touch on my way home at night, exhausted. Fennel also grows tall and vibrant on the hills of Wellington, where I lost myself in fragrant forests of fennel and laid on my back looking up at the golden umbels and the busy orgasmic humming of the bees collecting the fennel nectar.

Fennel (Foeniculum vulgare) is not native to New Zealand, Canada, the US or many of the places it grows so exuberantly. It naturalizes easily (especially if native plants are first cleared to create fields) and has followed European colonizers all over the world. Every part of the plant is used as food and medicine. Whenever fennel is introduced to a culture sooner or later it ends up being used for support and balance, especially for digestion and nerves. 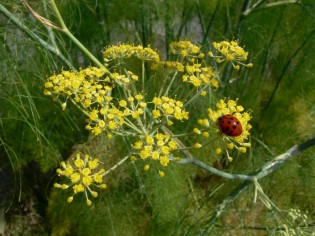 The first time I remember eating the crisp fennel bulb, also known as the Florence bulb, (different than wild fennel, which doesn’t produce a large root) was while cooking in Auckland during America’s Cup 2002. We served a refreshing side salad of freshly sliced fennel, vine-ripened tomatoes, olive oil, fresh basil, fresh lemon juice, black pepper and salt. The salad was simple but really hit the spot, unlike the crazy kitchen it was prepared in. The head chef had a heart attack just as opening night dinner kicked off, spilling a bucket of tomato sauce everywhere as he collapsed coming out of the chiller. He might have avoided such an event if he had been an avid fennel salad eater.

Fennel bulb is high in vitamin C, anti-oxidants and folate, all of which help to prevent heart attacks. Folate is necessary to convert homocysteine. Even a slight build up of homocysteine in the blood can increase damage to blood vessel walls. Damaged blood vessels are a precursor to atherosclerosis and heart attacks.

Folate is also imperative for pregnant women, a deficiency of folate causes neural tube defects in the baby. It is very important to get plenty of folate for at least three months before conceiving as well as during pregnancy. Fennel tea is helpful for balancing menstrual cycles and boosting production of milk. Components come through the mother’s breast milk that help provide the perfect atmosphere for healthy flora to grow in babies intestine, also easing colic symptoms. 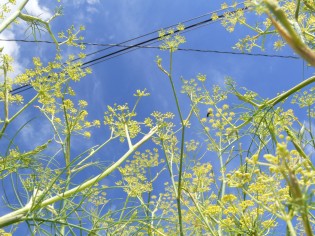 One of fennel’s powerful anti-oxidants is anethole. The compound anethole is a primary ingredient of fennel’s volatile oil (known as oil of anise). Anethole is what creates the flavor and smell of anise, it also excites bees as a plant sex-pheromone. It has been found to reduce inflammation and prevent cancer, protect the liver and relax the intestines. Oil of anise is also used to create a toxic substitute for the mind altering drug ecstasy. Other of fennel’s phyto-nutrients include rutin and quercetin, which are, in particular, very good for the eyes and in preventing varicose veins.

Fennel is one of the umbelliferae family, all of which continuously branch into smaller sections. Many of them have hollow stems, some of them, such as the carrot, also have a tendency to form large, nourishing roots. The umbelliferae family is known to be very good at absorbing various frequencies, some of which are caused by the movement of the sun, moon and the gravitational pull of other large bodies. The plant practically dissolves into the air, forming thousands of excellent receptors for these energy fields. The hollow stems channel them into the earth, where they are cradled and supported, manifesting into nourishing edible bulbs.

In the meantime the flowers distill powerful volatile oils and store them in the fruit/seeds. This could explain why the ancients believed all knowledge was transmitted from the gods via the lacy branches of fennel. This plant family forms a bridge between ether and earth, and may be the reason that fennel is used to assist digestion and balance the nervous system. Following the logic of the ancient law of similarities we note that our digestive tracts are also hollow, connecting us physically and energetically to the outer world by the food we absorb through our intestines.

Another fascinating myth in which fennel plays a central part is the tale of Pandora. This Greek legend explains the creation of humans. Prometheus hides a bit of knowledge in the shape of fire in a fennel stalk and whisks it away, under the nose of Zeus and gives it to his favorite creation, mankind. This makes Zeus angry and he punishes man with a woman in the shape of Pandora. Implanted with evil curiosity she opens the vial/box that keeps our secret dark things hidden. In the meantime Zeus also punishes Prometheus, tying him to a rock where an eagle is able to eat his liver every morning because it regenerates overnight. (Note the connection between regenerating livers and fennel)

The fennel mentioned in this tale is giant fennel or narthex which is a type of Ferula (asafoetida is another). Ferula forms huge stalks which are coated on the inside with slow burning resin, and was used as a vessel to carry smoldering coals. It was much more practical at the time to keep a fire going than to start one from scratch.

The narthex, spoken of in the myth, is generally considered extinct. Some people think asafoetida is the same plant because it has practically the same contraceptive abilities. There are various mysteries surrounding the ancient Ferula. It was all the rage for a period of time and was used to extinction. It would only grow in the wild and was worth more than gold. Narthex is central to the fertility and pleasure rites of Dionysus. The famous staff or thyrsus of Bacchus/Dionysus was made up of the stalk of the giant fennel topped with a pine cone and symbolized the phallus in the womb. The spark of fire within was the semen/seed of life. Perhaps narthex also had high concentrations of anise oil which creates mind altering ecstatic states while at the same time being an excellent contraceptive, the perfect facilitator for hedonistic rituals. It is after all a major ingredient in the traditional recipes for absinthe. 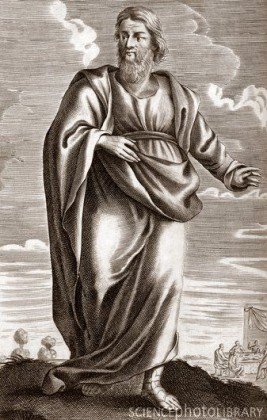 The mystery surrounding the giant fennel, also known as narthex, starts for us when a band of Greeks from the island of Thera, led by Battus I in 630 BC moved to Libya. They founded the five city states, called the Pentapolis of Libya of which Cyrene, in the Jebel Akhdar uplands, was the capital. The Cyrenes soon learned of the amazing properties of narthex, which only grew in a small area of Libya. The juice of the plant was in high demand, the Cyrenes gained monopoly and began exploiting it, which soon made them very wealthy.

Aristippus was a famous philosopher from Cyrenes in 300 BC who was also a disciple of Socrates and the founder of the Cyrenaic School of Philosophy. Aristippus believed in obtaining pleasure in the present, not struggling to obtain happiness in some distant future. The properties of the narthex may have inspired this school by providing a plant that enhances the pleasure of the moment, without the consequence of conception. In this sense, then Prometheus brought down the spark of fire in the narthex, a vessel of pure pleasure, that could hold smoldering embers for extended periods of time with minimal damage to itself.

Another interesting group that used the fennel staff were the Benandanti, who were an anti-“witch”/defenders-of-the-harvest cult, from Friuli in the North-Eastern region of Italy, in the 1500s. Anyone born with a caul is automatically a member of this group. Soon after turning a certain age they would be called, and once called they could not refuse to go. Four times a year the Benandanti would leave their bodies, sometimes shape-shifting into animals and go out to protect the crops from evil witches, the wicked, drought-causing Malandanti. The Benandanti fought their enemy with the fennel stalk. If they won the fields would be fertile and the children healthy.

Fennel is one of the Anglo-Saxon’s nine sacred herbs used to treat disease. Along with the phytonutrients mentioned earlier, fennel also contains calcium, magnesium, phosphorous, sodium, and phytoestrogens. It helps to digest fat and is reported to relieve menstrual pains more effectively than Ponstan. It eases hunger pangs, is good for the respiratory system, relieves migraines, is an anti-inflammatory, rejuvenates the liver and is a tonic for the nerves. 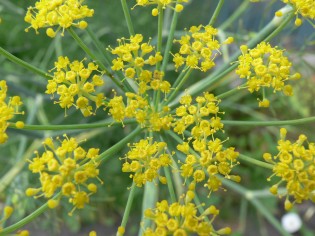 Fennel pollen is taken from the bright yellow flowers that form in mid-summer. The pollen can be used on desserts or on fish to form a tasty and beautiful crust. This sweet fennel pollen is one of the favorite foods of the Anise Swallowtail, a beautiful black and yellow butterfly. Fennel is used as a companion plant by many gardeners since the aroma of its volatile oils can dissuade hungry insects from eating the other plants. If you catch the umbrel at the right time, it literally drips with the sweet anise oil and is a snappy, tingling sweet anise taste on the tongue, a drop of liquid sunshine.

Fennel Tea:
It is easy to make a tasty, healthy tea from lightly toasted and freshly ground fennel seeds. When buying fennel seeds look for seeds that are bright green. Steep in hot water for ten minutes or so. Adjust amount of seeds according to your taste, I like about 2 t of ground fennel seeds per cup and some people like it with milk and honey. Be sure to use good water for best results. I generally find the best fennel seeds at an Indian foods shop.