Turmeric’s Got the Midas Touch 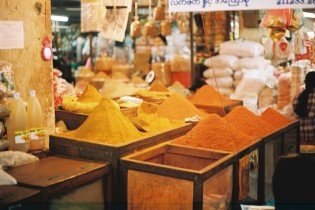 Golden Spice of a Golden Land

I developed a deep respect for turmeric the last time I was in Myanmar (Burma). Not paying close attention to where I was putting my feet, I had stumbled on a hole in the sidewalk while walking the streets of Yangon and sprained my ankle. Several Burmese friends advised me to paste my ankle with turmeric and water and wrap it up. It quickly reduced the inflammation and I was soon tripping down the streets again.

I began asking everyone I met about turmeric and marveled at the multitude of ailments that it is used for. Everyone agreed that turmeric was a good friend of women — for young women wishing to improve their complexion, regulate their menstruation and give them that virginal glow — but it was especially important for women right after childbirth. 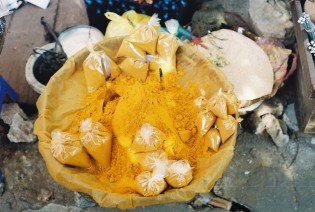 An enthusiastic and romantic young man told me how he had lovingly hand pounded the fresh dried root, mixed it with pure forest honey from the Shan States, rolled it into pellets and dried it in the sun for his wife in preparation for the arrival of his baby. Burmese women take these turmeric and honey pellets orally every day and paint their bodies with the paste of turmeric and water for about 40 days following childbirth. The turmeric is said to heat their bodies and cause them to sweat, purifying their blood and improving their circulation, making them fresh and new-born themselves, while at the same time protecting them physically, emotionally and spiritually during a sacred and vulnerable time.

This deep orange turmeric, Curcuma longa, friend of women, is also used in most Burmese dishes. It is heated in the oil with the onion, garlic and ginger base of Burmese curries and is also heated in the si kyet (garlic and turmeric oil) that is added to the wide variety of delicious Burmese salads. 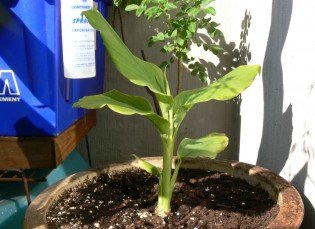 From the Zingiberaceae family which also gives us the other culinary delights ginger, galanga and cardamom, turmeric plants grow 3-5 feet tall and produce lovely gold flowers with a delicate mango-sunshine aroma. The trade center of turmeric was originally in Maharashtra, India and from here the benefits of turmeric spread to Myanmar and beyond. Traditionally, the fresh roots were stored in huge pits 18-20 feet deep and matured for 3-4 years. Once these huge pits were uncovered it was 2 to 3 hours before sufficient oxygen reached the depths to allow the cured roots to be retrieved.

Modern day methods simply include cleaning, boiling, drying and pounding this remarkable rhizome to make it usable for human consumption. It is interesting to note that most self respecting Burmese households will grind their own turmeric to ensure it isn’t adulterated with rice-powder. Turmeric is even used as an ingredient in traditional Burmese mosquito coils. 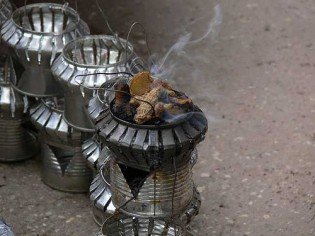 The respect and enthusiasm the Burmese people have for turmeric is mirrored in the present day scientific community as more and more of the traditional beliefs are being confirmed. Curcumin is the rhizome’s most renowned phytochemical and has been found to be a powerful anti-inflammatory, anti-oxidant, anti-fungal, anti-bacterial, anti-mutagenic, anti-parasitic and anti-viral substance. It has also been found to be very beneficial for stomach problems including indigestion, ulcers, diarrhea and helping to reestablish beneficial flora in the digestive system after a course of anti-biotics. More recently, studies are being done to test use of curcumin for nervous system disorders such as Alzheimer’s and MS. Some preliminary studies have also been done researching use of curcumin as a therapy for cystic fibrosis.

There are many more diseases that this spice alleviates or remedies. As a result curcumin supplements can be found in health shops all over the world. As the Burmese people well know it is difficult to tell the purity of such products. There is no need to pay for the extra packaging and marketing. Adding a pinch of ground turmeric to your daily diet is simple, practical, and cost efficient.

It is important to note that pregnant women shouldn’t consume much turmeric as it can stimulate uterine contractions. Turmeric stimulates the flow of bile, helping digest fats so it is best not to use too much if you have gall-stones.

Click here to cancel reply.
« Splenda: Made From Sugar?
Salt »