May 15th, 2007 | Herbs and Spices, Our Food, article, ayervedic, grow your own, health, protein, sesame, unani 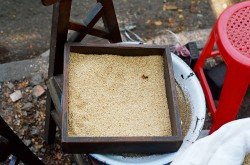 Perhaps the oldest seed utilized by man, sesame has been used for thousands of years as medicine, food and to light lamps. Although the first written record of sesame is 3,000 BC, Assyrian mythology gives sesame a role in the origins of our world. In this legend, the gods drank sesame wine the night before the earth was created. This tiny seed, which explodes from its pod when mature, is also called the seed of immortality and is considered to be good luck. It was the first plant used for its oil. In China the oil was originally burnt and used as ink. Some people think it wasn’t used as food until much later.

The sesame seed, Sesamum indicum, from the Pedaliaceae family, is well known throughout many cultures and has been valued as food and medicine alike. As sesame is a rare seed that contains high quantities of methionine and tryptophan as well as other amino acids. It is a perfect match for grains and legumes to create necessary essential amino acid balance in vegetarian diets. It is interesting to see how this little seed is eaten in deliciously complementary combinations across many cultures:

In Japan, the traditional art of creating the silkiest flavored oil is continued to this day. Human hair is used to filter the oil, creating an incredibly soft texture. Most sesame oil now available is extracted with high heat, bleached and deodorized. This process oxidizes the polyunsaturated fatty acids, creating rancid oils which are harmful, completely different from the cold pressed, beneficial sesame oils of our forefathers. 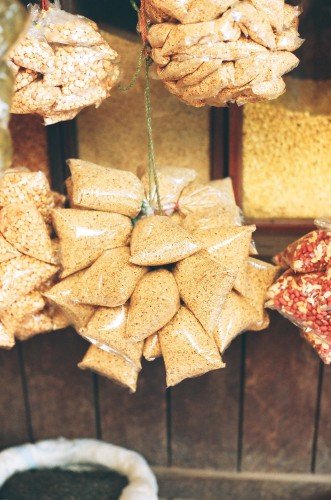 The black sesame seed in particular is renowned for its medicinal properties and is used in Unani, Ayervedic, Tibetan and Chinese medicine. It is traditionally used for problems with the liver and kidneys, dizziness, blurred vision, ringing in the ears, headaches and to relieve PMS. An interesting use for it is as a mouthwash for tooth and gum disease in which cold pressed sesame oil is swished around in the mouth and then spat out once a day. It is used as a sedative and will relieve anxiety and insomnia if a few drops are placed in the nostrils. Sesame fortifies the constitution when recuperating from long illness. In Ayervedic medicine the oil is often rubbed into the skin in a practice called abhyanga, which is done to improve energy flow and free the body of impurities. It has also been used for colic, rheumatism, burns, leprosy, piles and colds.

Some people swear the soup of ground black sesame seeds, rice and sugar is a perfect remedy for thin, limp and dull hair, if eaten two times a day. It is also commonly used in cosmetics, soaps and lubricants. The flowers of the sesame are used to make cologne.

Sesame seeds have about three times the calcium content of milk.

They also have magnesium, vitamin A, some B vitamins, sesamin lignan (an antioxidant), zinc, phosphorus, copper, iron and potassium. Modern studies have found the oil to have wide medical and pharmaceutical application, it is a mild laxative, has anti-cancer, anti-bacterial, anti-inflammatory and many other beneficial qualities. Cold pressed sesame oil has very high antioxidant properties making it a stable cooking oil. If added to other oils it helps prevent them from oxidizing as well. Although sesame seeds have not been a major problem for people with food intolerances its extensive use as a major ingredient in highly processed margarine may have created intolerance in some people.

These seeds have a nutty flavor that goes well with both sweet and savory food, making it easy to add to the diet:

Sesame seeds are much tastier when freshened up with a dry toasting, demonstrated here and then lightly crushed: