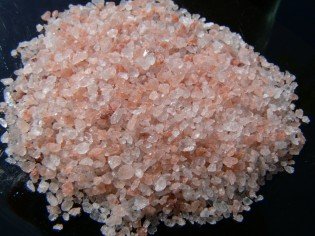 This last year salt seems to have kept popping up trying to grab my attention and finally it has. Now that I have sat down and done the research it is astonishing to me that it has taken this long for me to actually pay attention to this ingredient that I carelessly sprinkle into every dish, every day. Being a chef I have used Maldon salt, Celtic sea salt, smoked salt, kosher salt, rock salt, black salt, Hawaiian red salt, common, iodized salt and most recently Himalayan crystal salt. Perhaps more than an average amount of salt has passed through my hands and yet I have still not given it a second thought. It becomes even more surprising that salt has remained in my sub-consciousness, given my passion for researching into health and nutrition.

These days any discussion of salt will probably not get very far without the issue of hypertension springing up. It is a popular conception that low salt diets are useful in lowering blood-pressure given that there is a very strong relationship between sodium and cell osmosis — maintaining the proper fluid balance within and without of our cells’ membranes. As a result I have been astonished with the amount of people I have met, young and old, who are on low-salt diets. Interestingly, information I have found from research papers of long term studies from a variety of countries have come to the conclusion that there is no benefit in terms of cardio-health from consuming a low sodium diet.

In fact many of the studies have found the opposite to be true. Dr. Michael H. Alderman of New York City’s Albert Einstein School of Medicine and former president of the American Society of Hypertension after an 8 year study, in 1995, found those in the lowest sodium consuming quartile of his study had more than four times as many heart attacks as those on normal sodium diets. Several countries have therefore put out statements that universal sodium restriction is not recommended. In fact, a member of the U.S. Dietary Guidelines Advisory Committee mentioned that they are backing away from the low-salt recommendation. Please see the links below for sources and studies that back up these statements.

After making this point I must stress that there is a huge difference between processed and natural salts. There is evidence that common table salt which has been extensively refined, excessively heated (over 1200 degrees F) and treated, is toxic to our bodies. Essential minerals are removed as impurities. What remains is purified sodium chloride which, when isolated becomes an aggressive substance constantly seeking an equalizing counterpart such as potassium, calcium, magnesium and other minerals. What results is that our body, unable to process this form of sodium chloride, tries to get rid of it. This results in water molecules surrounding the sodium chloride in an attempt to neutralize it, creating edema. If there is still too much sodium chloride in the person’s system it is recrystallized and deposited directly into the bones and joints, causing arthritis, gout and kidney and gall stones. 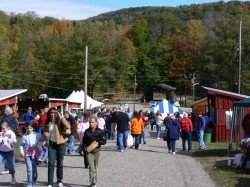 In the meantime, the body still has not received it’s required daily amount of salt and continues to crave it. A lot of energy and water is used trying to neutralize the purified sodium chloride which can result in dehydration. Along with these water balancing and detoxing issues, table salt has a variety of chemicals added to it designed to prevent clumping such as calcium carbonate, magnesium carbonate, as well as aluminum hydroxide. Aluminum is one of the causes of Alzheimer’s disease.

Highly refined salt is also overused in processed foods. At a country fair in the Catskills of New York, we came across a display provided by Cornell’s Eat Smart New York Program and were astonished by the large amounts of refined table salt in common food items such as hot-dogs, sausages, ketchup, chips and other convenient, processed, industrial foods. 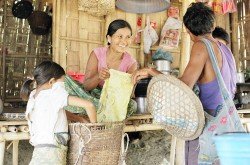 On the other hand, our brains and bodies need salt. Last year while traveling to a remote area in Chin State, Myanmar I gradually came down with an incapacitating headache and foggy brain so thought I must be getting dehydrated from the amount I was sweating as I walked in the scorching sun. Drinking water didn’t help the situation and then I remembered noticing a white crystallized powder on my bra whenever I had been sweating excessively. It occurred to me that I was loosing my body salt. We stopped at the only small tea-shop in the area, which was an open stand, built from bamboo on the edge of the river. There was a small container of salt on the table. I added some to my water and within 5 minutes the headache was gone, I could think again and my energy returned.

Historically salt was used medicinally for digestion, respiratory disorders, inflammation, healing, brain function, energy and topically. Salt has caused more wars and influenced more economies than any other food additive, including the spices — pepper, cloves, nutmeg, which also had a huge influence on trade and colonization. It has been suggested that the first war was over salt and that the Roman strategy was centered around salt. In fact, Roman soldiers used to be paid in bags of salt. The French revolution was begun by an astronomical increase in the tax on salt, and Gandhi began his march to the ocean to make his own salt and avoid the heavy tax the British had placed on it. The upper classes of the British made their fortunes on salt tax. Salt has historically been the center of politics as well as religions.

More information about all of these topics can also be found in the links below and is well worth taking the time to explore. For example the Masada was a strategic gateway for the Romans to access the Dead Sea salt, when their salt flats in the Mediterranean were unusable due to rising sea levels.

The question remains — what to use instead of the commonly available table salt? For years I have heard of the benefits of Celtic sea salt, of Maldon sea salt, of rock salt and of kosher salt and these are the things commonly used in upper level food service establishments. Perhaps historically sea salt was a better option to the our modern table salt, but often these days products labeled sea salt are also highly refined and even kosher salt has anti-clumping agents added to it. Our oceans are also not what they used to be and have been used as a dumping ground. The other day I heard of a huge area of the ocean in the Pacific where currents have created a huge island of plastic bags. We are warned not to eat large sea fish as they concentrate heavy metals in their bodies. Our oceans are contaminated with mercury, lead, PCBs and dioxins, even sea salt that is not refined and treated is something to be wary of, although it is still much better than table salt. I have recently started using Himalayan crystal salt and have been amazed at the health benefits I have experienced.

History and Health Benefits of Salt

, by Mark Kurlansky
Water and Salt, The Essence of Life

Please let me know if you have any other great sources and I will add them to the lists. Thanks.

Click here to cancel reply.
« Turmeric’s Got the Midas Touch
The Heart of Maizeland »
We use cookies to ensure that we give you the best experience on our website.
If you continue to use this site we will assume that you are happy with it.