The Birth of a Biome 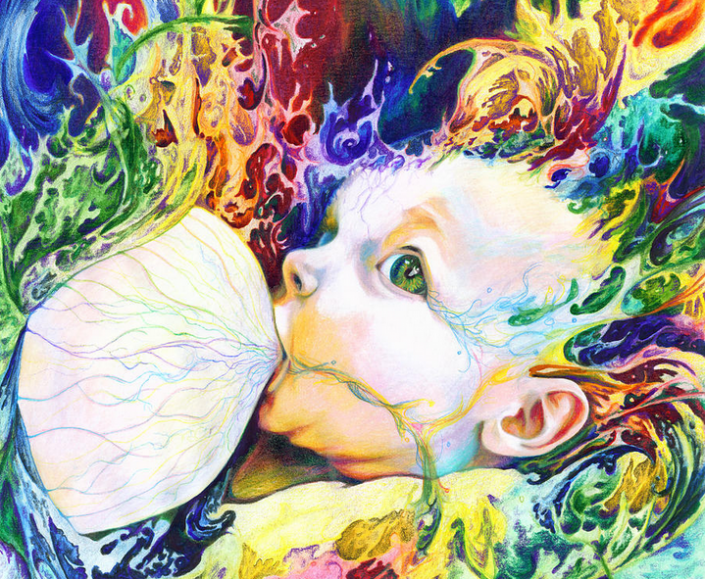 This article is from the newsletter of one of my favorite sites for magnesium oil, probiotics and powerful detoxing clay baths: www.magneticclay.com

The Birth of a Biome

Our microbiome, the population of symbiotic microorganisms that lives with us on our skin and in our guts, is an ecosystem of unimaginable proportion. Much like the vastness of the cosmos, it is doubtful that we will ever truly comprehend the sheer magnitude of its influence on our evolution, our health, and even our existence and the future of our species.

But how does our microbiome form? What shapes it and influences its composition? Like most things, there must be a beginning – a birth, so to speak.

A mother’s body ultimately holds the microbial blueprint that will be passed down to future generations. All things considered, she is the single most influential factor in the establishment of her offspring’s microbiome, the protective system that will develop her child’s immune system and enable healthy digestion and absorption of food.

Even more than that, her gut flora is responsible for the breakdown, absorption, and synthesis of vital nutrients in her own body. These nutrients are critical to maternal health and wellbeing, as well as fetal development , so it’s important for pregnant mothers and those wishing to conceive to remember to prioritize the health of their gut flora.

Although it was previously thought that an infant’s exposure to our world’s microscopic inhabitants began at birth, more recent research has indicated that colonization actually begins in the womb.

Studies have shown that uterine tissues hold their own individual microbiome profiles – the placenta, umbilical cord, and even amniotic fluid are all teeming with microorganisms.

Interestingly, it has also been discovered that birthing methods play a significant role in establishing the foundation of what will mature into our adult microbiome.

Researchers observed that as an infant passes through the birth canal, their entire body is coated in a specially tailored blend of microflora – some of which is ingested, helping to populate the GI Tract. This exposure also serves to populate mucus membranes such as the eyes, nose, and genital regions, as well as blanketing the skin in a sort of living shield.

Although it has long been suspected that certain health benefits are conferred to the infant during vaginal birth, those conducting these studies were surprised at how significant the compositional difference was between infants born via vaginal births and those born via cesarean – both in quantity as well as diversity of microbial species, especially in the gut.

Because this early inoculation and the formation of a child’s microbiome is so essential to later health, alternative means of transmission are being sought for infants born via cesarean in response to these findings, including manual transference of bacteria from the birth canal to the newborn infant.

Once the infant is born and initial colonization has occurred – then what?

Fortunately for us, evolution has provided the means to build a robust and balanced gut microbiome right from the start.

For years, researchers have been trying to determine the purpose of the considerable complex carbohydrate (oligosaccharide) content found in human breast milk. High oligosaccharide content has remained a mystery until looking through the lens of the role our beneficial microorganisms play.

With new insights into our microbiome, it has been revealed that the oligosaccharide content is crafted by nature to assist in the development of an infant’s early microbiome. Not only is it specifically suited to feed the growing bacterial populations, but it selectively supports beneficial strains while inhibiting the growth of pathogens.

Adding to that, it is now understood that human breast milk is a bioactive substance containing a wealth of microbiota – the population of which is directly linked to the composition of the mother’s gut microbiome.

To date, infant formulas have provided neither prebiotic nor probiotic in their formulations, resulting in less than optimal gut colonization in bottle-fed infants. Studies have suggested that this may be a contributing factor to certain health conditions in childhood , such as eczema, asthma, and allergies.

Around the age of 6-9 months, infants begin to crawl, scoot, knee-shuffle and a multitude of other activities that involve close contact with the ground. They also begin to explore new flavors and their mouth becomes a vehicle for tactile exploration. Much to many a parent’s dismay, this translates into a seemingly endless amount of items being put into the infant’s mouth!

For our ancestors, this meant that children were exposed to a whole host of ground-dwelling microflora – including soil-based organisms – from a very early age. Direct contact with these environments provided an opportunity for diversification of their microbiome, adding new and varied strains to the gut.

Not only are these first experiences vital to building a healthy, balanced blend in your GI tract, but research conducted by Johns Hopkins Medicine has reinforced what we have known for some time – that exposure to common allergens as well as wide array of bacteria early on in life may in fact prevent susceptibility to those allergens later on.

“Infants exposed to rodent and pet dander, roach allergens and a wide variety of household bacteria in the first year of life appear less likely to suffer from allergies, wheezing and asthma.”

Unfortunately, many parents have been misled to believe that all microorganisms are harmful , driving a desire to over-sanitize both our living spaces and ourselves. This has extended to how parents choose to manage their infant’s environments – restricting access to anything that has not been rigorously cleansed and exposing children to chemical products containing antibacterial ingredients.

These good intentions have led to steep repercussions, contributing sharply to a rise in gastrointestinal and immune-related issues.

Equally crippling to the human microbiome is the drastic increase in prescription antibiotic use, especially so early on when the gut is still very vulnerable and less capable of bouncing back from such a loss.

Between birth and adulthood, our bodies witness the development of over 10,000 species and 100 trillion organisms that provide myriad functions to support our health. Without them we could not absorb many of the most nutritious foods we consume, our immune systems would be immobilized, and even our mental health would suffer.

Fortunately, a growing awareness of the importance of healthy, symbiotic bacteria has begun to spread and a revolution in gut health has begun. Books like Good Germs, Bad Germs and Why Dirt Is Good have educated parents and health advocates to begin pursuing a “microbiome-friendly” lifestyle, eliminating the use of excessive household antibacterial agents and seeking out broad spectrum soil-based probiotics.

Given the complex relationship between us and the trillions of microorganisms sharing our bodies, it’s not surprising that the building of such an infrastructure takes time and is influenced by so very many factors. From the time of conception, we are bombarded with the very tools required for our survival – now we simply need to learn how we can better advocate for our silent symbionts and help to undo years of damage and neglect.

Click here to cancel reply.
« A Child’s Food Preferences Begin in the Womb
The Aspartame Story »
We use cookies to ensure that we give you the best experience on our website.
If you continue to use this site we will assume that you are happy with it.