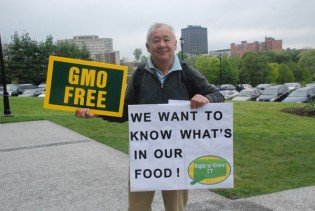 The Governor has yet to make a statement about his actions, but individuals within the administration indicated that the reason for removing Section 2 from the bill was because of concerns that the bill put CT at risk for being sued based on the outlandish and outdated concept that GMO labeling would be unconstitutional and violate the merchants’ right to remain silent and not disclose what products contain GMOs.

While it is yet to be determined whether governor Malloy is afraid of the biotech industry or actually in their pocket, one thing is clear, HB 5117 landed on the Governors desk because it was about to pass the CT House Legislature. Legislators and activists in the Right To Know CT campaign alike are outraged that they were robbed of due process.

DO NOT allow Governor Malloy to get away with this. This can happen in your state too!

Call, write, Facebook, and Twitter Governor Malloy to tell him we know what he did and we are demanding that he put our right to know in front of the interests of the biotech industry.

Send a message to our government and the industry. STOP buying products with GMOs today. If our government is not going to protect us we need to protect ourselves. Go to www.nongmoshoppingguide.com to learn how to avoid GMOs.

Tara Cook-Littman and the Institute for Responsible Technology Staff

Click here to cancel reply.
« MIFEE: An Agribusiness Attack in West Papua
Study of Amish Children Proves Raw Milk Promotes Health, Boosts Immunity »
We use cookies to ensure that we give you the best experience on our website.
If you continue to use this site we will assume that you are happy with it.