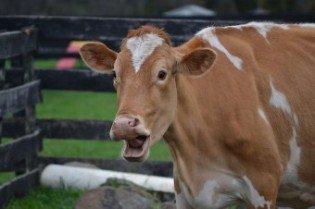 We recently got word that our cows are going to be confiscated and sold. I wonder if this is next on the agenda in Canada 🙁 What a waste of money and time when we should all really be putting more resources into what we can do about the Fukushima issue that is contaminating all the food along the West Coast (not to mention in Japan)

The founder of the Organic Pastures business in California is reporting that government health officials have begun tracking down the names and addresses of natural-foods customers and showing up at their homes, demanding to confiscate any raw milk they might have.

The dispute over raw milk has reached a fever pitch in recent weeks, with a judge ruling that owners of cows have no right to the milk their herds produce, and protests being staged by mad moms whose access to such foods is being threatened.

The latest report is at NaturalNews.com, which interviewed McAfee.

“According to Mark McAfee, both L.A. County and San Diego County have attempted to acquire customer names and addresses from Organic Pastures for the sole purpose of sending ‘food confiscation teams’ to customers’ homes to remove the raw milk from customers’ refrigerators.”

NaturalNews.com quoted from one of McAfee’s reports:

I received a phone call yesterday morning from a wonderful young gal, a 36-year-old mom out of LA County. She’s one of our UPS customers that we deliver overnight raw milk to her house. When the CDFA was in here the other day on our recall, they demanded to have all our delivery addresses for overnight UPS delivery. We screwed up and [inadvertently] gave it to them, they got it from one of our secretaries here. The LA County health department started calling her, six or seven times, demanding that she give up her raw milk from her own home to the health department.

She refused, then they showed up at her house and demanded that she give her raw milk to them. She was getting ready to call 911 for the sheriff’s department and have them removed from her front doorstep, and she was threatening to use her camera to take a picture of them and post it on Facebook for harassing her over her raw milk… The investigators left after she told them she was not going to give them the raw milk and to get the hell off her property.

This is what’s going on, it’s like food Nazis, it’s incredible what these people are doing, trying to collect food from people’s houses, that have not made them ill!

Then the San Diego health department called me up and said oh we want a list of all your buyer’s club members, and I said no… and they said we want all their addresses and their names, because we want to go to their homes. I said it ain’t happening, we aren’t going to give it to you.

Mike Adams reported on NaturalNews.com: “Remember: The raw milk from Organic Pastures is legally sold, legally purchased, and greatly enjoyed by its customers. There are virtually no complaints about this product. Customers love it. Only the government wants to confiscate it and destroy it.”

He said, “What this clearly demonstrates is yet another ratcheting up of the California police state, where county authorities reach right into your refrigerator and confiscate food that they claim might not be safe — food that you’ve legally purchased and wish to consume knowing full well that it’s fresh and raw!”

It was just a few days earlier that mothers in Minnesota staged a protest at the trial of the manager of a farm buying club. The situation there had been monitored by the Farm Food Freedom Coalition.

WND previously has reported on disputes between farmers and consumers on one side and regulators on the other. They have involved the purchase by consumers of raw milk, the rights of consumers to access milk from their own cows, a radio program that offered natural products and a blogger who wrote about his battle with diabetes and was threatened with jail.

The Farm Food Freedom Coalition protested the Minneapolis trial of Alvin Schlangen, a farm buying club manager. The group said that mothers in the state who act as hosts for “drop sites” for farm buying club members now have been threatened with criminal charges.

Another supporting organization, the Raw Milk Freedom Riders, said that Schlangen founded the Freedom Farms Co-op, which simply connects people with the foods of their choice from local producers.

Over the past two years the Minnesota Department of Agriculture has raided Schlangen’s operations several times.

“It is absolutely outrageous that during this time of economic crisis our state government is investigating and sending warning letters to mothers and putting farmers on trial who are helping provide communities with fresh foods. It is my right to contract privately with a farmer for the food of my choice just as it is the right of every American,” said Melinda Olson, a mother and recipient of one of the MDA’s warnings.

Pete Kennedy of the Farm-to-Consumer Legal Defense Fund, who tracks such issues nationally, said, “Nowhere in the country at this time is state action against food freedom and consumer choice more oppressive than in the state of Minnesota.”

Today, 30 states allow the sale of raw milk and 20 forbid it, but the federal government forbids it in interstate business.

In California, three people are facing trial following an investigation of the Rawesome buying club. In that case, one of the defense lawyers was stunned by the militancy of the prosecutor, declaring, “She doesn’t want raw milk. … She wants blood.”

The federal government has a long history of cracking down on those who produce raw milk and make it available to consumers – even when the consumers are the ones who own the cows and milk.

In the recent case in Wisconsin, a judge ruled that Americans do not have a right to choose their food, not even when they own the cows and the milk.

Kimberly Hartke of the Campaign for Real Milk, a project of The Weston A. Price Foundation, has told WND as the cases have developed the government’s “heavy-handed” tactics simply have gone too far.

“As more consumers seek greater access to local farm fresh milk to feed their families, our federal government is working overtime to curtail freedom to feed your family the way you deem necessary. Since most seek raw dairy for health reasons, this is a serious concern,” she said.

It was a ruling from Circuit Court Judge Patrick J. Fiedler in Wisconsin that said the families who reported they were boarding their cows for a fee and then getting the milk instead were running a “dairy farm.”

“It’s always a surprise when a judge says you don’t have the fundamental right to consume the foods of your choice,” said Kennedy.

“They do not simply own a cow that they board at a farm. Instead, plaintiffs operate a dairy farm. If plaintiffs want to continue to operate their dairy farm then they must do so in a way that complies with the laws of Wisconsin.”

He continued, “The court denied plaintiffs’ motion for summary judgment, which means the following:

Click here to cancel reply.
« Open Letter to Global Cowshare Community
Tulsi (Indian Basil) Works as Anti-Radiation Medicine »
We use cookies to ensure that we give you the best experience on our website.
If you continue to use this site we will assume that you are happy with it.